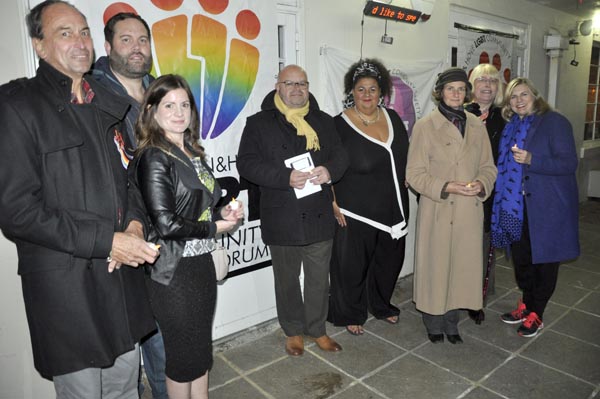 The Vigil was one of many taking place simultaneously in cities all over the country to mark the three nail bomb attacks that shook London on April 17, 24 and 30 in 1999.

The event was compered by Billie Lewis, the elected volunteer Chair of the Brighton & Hove LGBT Community Safety Forum who organised the event.

Rev Michael Hydes welcomed everyone to the Vigil and speakers included Joanna Rowland-Stuart who spoke about bullying and how her life had been impacted by disability hate crime.

Maria Baker, the black and ethnic minorities rep on the LGBT Safety Forum spoke about racist bullying and how it affected her at school.

Sara Jones, business manager of the victim and witness services at the office of the Sussex Police Crime Commissioner explained about the new Hate Crime app, Self Evident how to download it and how to use it to report Hate Crime.

Rory Smith, the civilian LGBT Liaison and Hate Crime Co-ordinator at Sussex Police explained how to report Hate Crimes to the police and why it is important to do so no matter how insignificant you might consider the offence to be.

Musical interludes were provided by Son Son who sang three self penned numbers, Dreaming in Brighton, Outta Here and Mother Theresa and Christoffer James Baker brought the Vigil to a close singing the hauntingly beautiful Mad World and the uplifting Something Inside So Strong.

If you are the victim of a Hate Crime and want to make a third-party report which can remain anonymous if you wish, telephone 01273 855 620 pressing option 2.

The new Hate Crime App Self Evident can be downloaded on all iPhones and android handsets. For more information, click here:

In an emergency, always telephone 999 to report Hate Crime to the police.