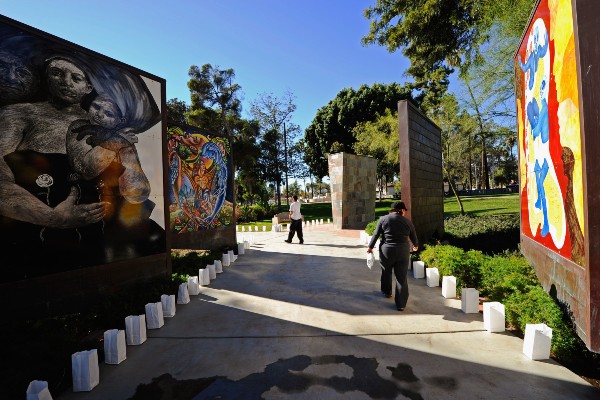 17 years after first being unveiled to the public, an HIV/AIDS monument in Los Angeles has received $850,000 in renovation funding from city authorities to create new walkways, plant new trees and set up lighting around the site in Lincoln Park. According to the Bay Area Reporter, the monument was first designed by architect David Angelo and public artist Robin Brailsford; it represents a Quetzalcoatl serpent, which is an Aztec a symbol of rebirth.

The memorial plaque has capacity for 8,000 names of those who have died of AIDS, and currently has fewer than 600 inscribed. Names can be submitted from anywhere in the world to honour those who died of the illness, and 500 more names are due to be added this summer in time for the unveiling in September. The renovation project was due to begin last year but was put on hold due to the Covid-19 pandemic.

Richard L Zaldivar, the founder and executive director of The Wall Las Memorias Project, which formed in the 1990s to build the monument and provide HIV/AIDS education and support, said the area is going to “look incredible” following renovations. He said the purpose “building the monument was not only to remember people who passed away from AIDS. It was also a process that allowed a community to become aware, acknowledgeable and accept responsibility that they have to address HIV and AIDS in their community.”