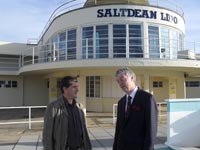 Simon Kirby, MP for Brighton Kemptown and Peacehaven, which includes Saltdean, is holding a drop in surgery for his constituents during this year’s Saltdean Lido Fun Day, tomorrow, Saturday June 1, in Saltdean Oval Park.

“This is the 3rd Fun Day and the previous days have been terrific so I am very optimistic for another excellent event. Alongside local councillors  I have been a huge supporter of the efforts of the Saltdean Lido Community Interest Company to offer a viable, bright future for the Lido, which has the potential to be such a wonderful community amenity.”

The theme of the fun day this year is 75 years of the Lido.  Lots of activities are planned, including displays from the Sussex Police Dogs team, a vintage fair, live music and children’s entertainment.

“As well as holding regular constituency advice surgeries across the constituency I will be manning a stall during the day to give residents another opportunity to meet with me to discuss any issues they would like to raise.  I always try and make myself as accessible as possible to constituents.”

On a separate issue Simon has been granted extra inbox capacity by the Parliamentary authorities due to the huge volume of correspondence he has received from local constituents about the present bin collection crisis in Brighton & Hove.

“Whilst I am always very careful to archive old emails and to manage my inbox to save as much space as possible, the huge volume of correspondence I receive from constituents means that my inbox is regularly nearly full. I have previously requested more space from the Parliamentary ICT department and I am pleased that they have agreed to my request.”

Simon receives many hundreds of emails every week, including important correspondence from constituents, Government Departments and local charities. The number of complaints from residents about the bin crises recently has overloaded his mail box.

“I aim to be as accessible to constituents and always try and reply as promptly as possible to all correspondence I receive and I am pleased that I will now be able to continue to do so as efficiently as possible.”

Having been inundated with complaints from angry residents, Mike, has slated the Green administration for raising council tax for residents and then failing to collect their rubbish.

Rubbish in Brighton & Hove has been left uncollected for weeks and Mike claims business leaders are now worried that given that Brighton & Hove’s economy relies so much upon tourism that the mess strewn across the streets is hurting local trade.

“Residents were angry enough when they received their council tax bills which had gone up courtesy of the Greens and Labour in Brighton & Hove. But on top of that bombshell, many streets in the city now resemble a landfill site. More concerning though than the unsightly mess and smells, is the environmental impact of rubbish left out to rot. Indeed, I have heard from a number of accounts of rats feasting on the waste left by the Greens.”