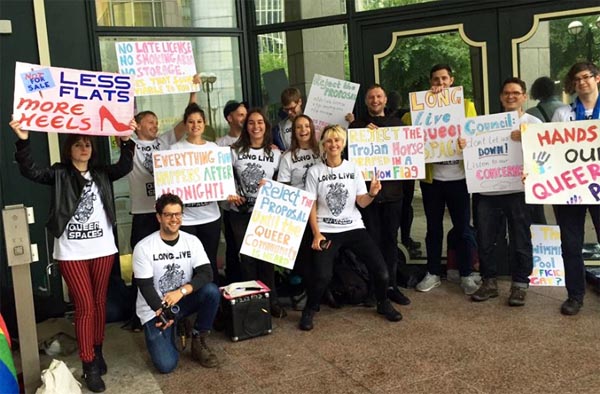 The Friends of the Joiners Arms, who fought for 3 years to protect the legacy of the legendary Hackney Road LGBT+ pub, are holding public meetings to include everyone who wants to play a part in deciding how to create a radical, community-run venue on the site of the Joiners Arms.

This follows the trail-blazing decision by Tower Hamlets council to insist that a new development on this site must include an LGBT+ pub, with opening hours mirroring those of the original pub, a 25 year lease, and financial assistance for any operator.

Jon Ward from Friends of the Joiners Arms’ (FOTJA), said: “FOTJA is a testament to the power we have as queers unified against a common enemy: in a fight reminiscent of David vs. Goliath, the developers expected that they would be able to demolish the Joiners Arms and redevelop the site with one solitary goal – profit. That these plans did not succeed and that Tower Hamlets supported our protests in such groundbreaking fashion demonstrates our collective strength in fighting gentrification.

“Now is the time to build on this success and rethink what we want out of queer spaces: with particular attention paid to elevating those voices and needs which are usually marginalised, even within our own LGBT+ communities.”

FOTJA’s Amy Roberts added: “As excited as we were to have won planning protections for a like-for-like replacement of a late-license LGBT+ bar in the Hackney Road development, this victory only marked a successful end of ‘phase I’ – not the end of our journey.

“The doors of our beloved Joiners remain as closed as they first were in January 2015, and we are still without a vital queer space. Now we enter ‘phase II’: creating a radical organisation and working towards opening the doors of London’s first community-run LGBT+ bar. That first pint is going to be a good one.”

FOTJA’s Dan Glass, said: “There are already existing, successful models of community-run pubs such as the Antwerp Arms in Tottenham, or the Bevy in Brighton, and we want to use this model for the queer community, to fight back against the crisis of closures in London. We are hugely grateful to the support of the Plunkett Foundation as part of their ‘More Than A Pub’ programme which will give us the framework and assistance to create something radical, exciting and hugely necessary.”

The Friends of the Joiners Arms is a campaign group seeking to create London’s first community-run LGBT+ pub, building on the legacy of the legendary, radical pub on Hackney Road. In Oct 2017, the group secured protections from Tower Hamlets council covering the future redevelopment of the site.

The group intends to use the popular model of the community benefit society to open a new Joiners Arms as London’s only cooperatively owned and managed LGBT+ late-licence pub, whilst developing the community functions of the pub. This will be a space that provides vital facilities and support to all LGBT+ individuals and allies who wish to stand up for minority communities, support one another, and proactively engage in building a future free of hate and insecurity.

To acquire tickets online for one of the meetings. click here: