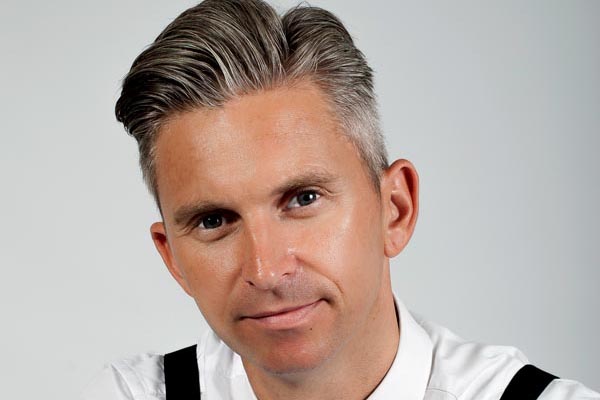 Jason Lee, the Brighton-based singer/entertainer, talks to Brian Butler about his musical family, Freddie Mercury and being Frankie Valli.

JASON Lee was destined to be a singer and musician – it’s in his genes for sure. One of 4 sons of a highly talented musical family, he began life in the Cotswolds surrounded by the sounds of music at home.

“There was no other path that seemed available” he says. And it’s a path that has taken him all over the world, on cruise ships and in show bars, theatres and concert venues since he was a teenager.

Now turned 40, he says he has enjoyed every minute of his 25-year career.

As a child he wrote music and has continued to do so. After studying drama and music at school and playing gigs with local bands – mostly rock and roll – “where my heart lies“ – he decided he needed to discover himself . “So guitar on my back I travelled through Europe as a teenager. I can’t believe I did that – playing in restaurants on the Costa Brava and then down the coast from Estartit. I followed the sunshine,” he says, laughing.

Joining a small production company got him into musical theatre – which has endeared as his chief love. He spent 5 years in a show bar in Tenerife as their principal singer. While there he met a holidaymaker who became his husband to be. They have been together for 16 years.

Once into musical theatre he widened his knowledge and tastes to shows like Les Mis, Chicago and the works of Stephen Sondheim.

“We came to Brighton for a visit and fell in love with the place . We decided we needed to move here.“ And so they did.

After gigging in pubs Jason played in a few showcases and landed the part of Frankie Valli in a touring spin-off show about the Four Seasons. It’s a characterisation that he has continued to develop and it’s now a big part of his repertoire.

But he’s also played Brian Wilson in a touring show Good Vibrations for a couple of years. On and off cruise ships he played both singers in separate shows.

“My earliest memory is of singing with my mother in our dining room. She was a great fan of the Beach Boys and along with the Four Seasons were always being played on the gramophone.”

“I had always had a falsetto voice and I always knew where the break in my voice was to get the head tones.“ And that enabled him to get Valli’s famous high notes.

“I never had any training as a singer so I never thought that I would get into big permanent shows. I haven’t had a career path; I just try to keep happy in what I’m doing. I would love to do Sunset Boulevard, Les Mis, Phantom, Sweeney Todd and the Boy from Oz – a little appreciated musical about the life of Peter Allen.”

He admits he is still waiting for a show which he can look back on as his ‘big thing’ but admits he doesn’t know what it will be. Asked who his biggest influence has been he says quickly “Freddie Mercury … he was just amazing the way he held an audience in his hand- it’s an absolute craft.”

Asked to give advice to his young self, he says; “Don’t stop writing music and stop worrying” admitting that as a young gay man in a village was at times confusing for him. “Don’t hold back” he adds.

His future plans in Brighton include An audience with Jason Lee – A Davina Sparkle event on Sunday, March 24 over lunch at the Jury’s Inn Waterfront, where he promises Valli and many more offerings.

And he will be hitting the road to panto land in Brighton’s alternative pantomime – this year at the Phil Starr Pavilion on Victoria Gardens during the B Right On, where he will be playing Dick in Big Dick Whittington and His Pussy from April 4 to 14 along with Brighton’s best including Dave Lynn, Davina Sparkle, Miss Jason, Lola Lasagne, Sally Vate, Allan Jay, Christopher Howard and Stephanie Von Clitz.

“I don’t make a lot of plans for the future though I am extremely busy this year. I thought I would stop when I was 40 but I didn’t. I don’t think I’ll ever stop performing. It’s like a drug isn’t it?”

He’s no longer keen on long periods away on cruise ships, and now tends to get flown out for one night and flown back.

“It’s all about selling that song – even if you’re playing to a handful of people.”

On the vexed question of the future of the Pride Village Party, Jason is very clear: “It’s the heart of pride and of the Brighton community. It would be a real shame to lose that. Long may it continue as it is.”