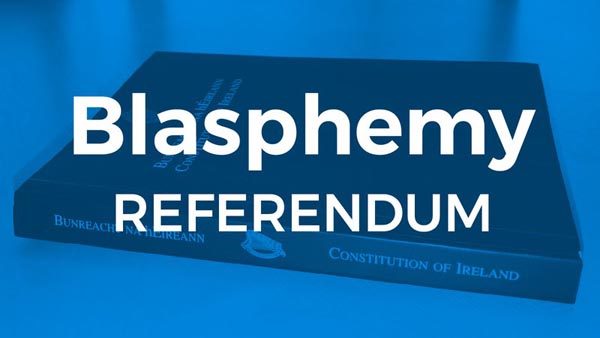 Ireland’s vote to remove blasphemy from its constitution is a resounding success for free speech, says Humanists UK.

The referendum followed complaints made to Ireland’s police service following an interview on RTÉ TV between Gay Byrne and comedian Stephen Fry.

In the interview, Byrne asked Fry “what would he say to God in the afterlife.”

Fry responded: “Why should I respect a capricious, mean-minded, stupid God who creates a world so full of injustice and pain?”

He was accused of running afoul of Ireland’s blasphemy laws, and Irish police opened an inquiry.

The investigation was eventually dropped, however the high-profile nature of the case sparked a public debate about the country’s blasphemy laws resulting in an alliance of 14 Churches – including the Catholic Church – declaring the constitutional clause “largely obsolete” and calling for its removal.

Humanists UK encouraged Irish citizens to go home to vote in the run-up to the referendum, with Stephen Fry tweeting about its campaign. On the eve of the referendum, Fry tweeted: “that scrapping the blasphemy law would be a signal of a “new, tolerant, liberal Ireland”.

Welcoming the referendum decision, Humanists UK chief executive Andrew Copson said: “Irish people have voted to decriminalise blasphemy because they value their right to freedom of expression and they don’t believe that making comments about religion or a God should ever be a crime.

“It is welcome news for the international campaign against blasphemy laws, as even though the Irish law was obsolete, countries like Pakistan have cited it to justify persecuting religious minorities and the non-religious and enforcing extreme punishment such as prison or death for people accused of blasphemy.

“Today’s vote should surely also send a strong message to Scotland and Northern Ireland of the need to urgently join the growing international movement of countries turning against these laws.”