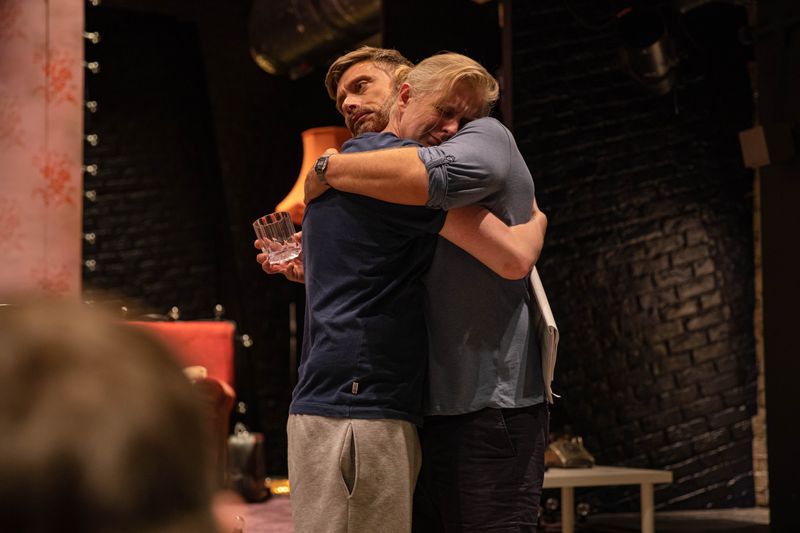 Paul Taylor-Mills is the Artistic Director and founder of The Turbine Theatre in Battersea. It’s on the banks of the Thames next to the iconic Battersea Power Station. Their latest production is a revival of the 1994 classic My Night with Reg by Kevin Elyot. The play takes a tragicomic look at gay manners and morals in the age of AIDS. We caught up with Paul Taylor-Mills to find out more about the play, the theatre itself, and surviving the pandemic.

First of all, how did you get involved with The Turbine Theatre? “I was approached by Battersea Power stations about three years ago. I’d run venues before and was terrified about doing it again. The redevelopment of the power station is absolutely amazing. The opportunity to be involved in something like this was hugely thrilling for me.”

Not long after opening the pandemic struck. “We had about six months so it wasn’t the best timing in the world but it encouraged us to think about things differently.” They managed to put on outdoor performances in the summer of 2020, keeping theatre going at a very difficult time. “At Christmas we were able to do a panto which was cut short, but we recorded it and screened it very successfully.”

How did you discover My Night With Reg? “It’s a seminal gay play I’d seen years ago. I read it over lockdown one afternoon. I know plays are meant to be seen and not read, but there was something really interesting about reading the play in the middle of a pandemic. It echoed some of the issues the characters in the play had to face. The nature of disease, people not really understanding it, how they survived, and had a support network. It’s very similar to where we are now. I think it’s one of the most beautiful plays ever written and I thought we must do this.”

Is the play a sort of time capsule? “It is of a certain time, but the staggering thing is that although we’ve come so far, in many ways we have a lot further to go. And that’s what I think drew me to the play: it was so ahead of its time. It feels so fresh as you read it.”

How would you categorise the play? “It’s from the gay cannon and yes it’s a gay led story, but it’s actually a very human story. It’s presented against a very comical backdrop, but the thing that really struck me is that ultimately, it’s a story about how resilient human beings can be. That’s what really drew me to it.”

How have you gone about staging it? “It’s set in a living room and it’s a three act play. In terms of tone it’s quite naturalistic. Our theatre is essentially a tunnel under a railway track. For the first time in our short history we’ve gone for something quite bold: we’ve kept the architecture of the railway out – but I’m not going to give too much away! The set is almost see-through, and that allows us to focus on these beautifully drawn characters Kevin Elyot came up with.”

What can you tell us about Kevin Elyot? “He did lots of plays and went into TV too. Quite a lot have a gay theme but not all of them. His ability to draw characters is really incredible which is why all these years later people still produce his plays.”

Has lockdown changed the way you view theatre? “This time last year we were in a deep lockdown but the thing that kept us busy was watching Netflix. I’ll bet that a lot of the people who wrote those shows started in theatre. We have to remember the value of the theatre, not just for the economy. We have to understand that if we don’t have theatre we don’t have Netflix. As we move forward to whatever the new normal will be, theatre is what’s going to bring us back together. I think.”

Andrew Lloyd Webber has been very unhappy with the government. How are you dealing with the latest guidelines? “They’re a nightmare for everyone, I could talk about it all day! There’s no insurance scheme in place. Theatre is risky enough at the best of times. Now it’s lunacy, almost, as it could stop at any point. The problem with the ping, as it were, is that even if you have a negative result you have to isolate. It becomes so complicated to reopen a show when it’s closed. We do have rigorous testing but there has to be a more effective way of dealing with this, both government-backed insurance schemes and a different way of dealing with the ping.”

Has LGBT+ visibility improved in the arts? “We’ve made some progress but we still have a long way to go. I’m so pleased LGBT+ stories are being told and there’s an appetite for those stories.”

Paul has also produced Heathers at the Theatre Royal Haymarket and Be More Chill at the Shaftesbury Theatre. “It’s thrilling to have two shows in the West End and also one at The Turbine. We also have an outdoor festival on the jetty in Battersea. It’s going really well.”

Will you be taking any of these shows on the road? “It’s complicated at the moment. Scotland, Wales and Ireland have different policies which does create problems. That being said, My Night With Reg will go on a regional tour. I’m really keen to look at the positive things that have happened over the last year. It’s forced me to have conversations with regional venues I perhaps wouldn’t have had before. I might not have had the time to do that before.”