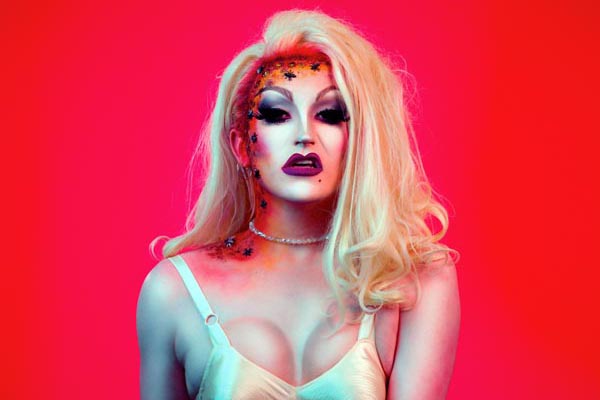 If the world ever ended, there’d always be Lydia L’Scabies – scuttler of West Street pavements and recipient of many unfortunate sounding diseases.

GRAHAM Robson caught up with the self-styled mite-ridden slag and Queen of Flea to chat drag politics, skin complaints and the queer scene…

Where did the idea of Lydia crawl from?
She was initially inspired by the wonderful squawking and yacking gals of West Street, Brighton. I’ve always considered drag to be a critical reflection on the current culture (depending when the act started) and I wanted to represent that. I’ve always been motivated to parody the expectations of women in today’s culture, so making a female character that is unapologetically ‘slaggy’ (reclaiming that gorgeous slur), who literally has bugs crawling all over her face and sparkling weeping rashes behind her knees, in her hairline and in-between her fingers, was the perfect satirical response to that.

Scratch that! What’s her story?
Lydia can be anything from hilarious to horrifying! I have a few signature acts that are quintessentially Lydia: What The Word Crabs Means To Me, Never Been A Bad Girl, You Ruin Me.
Outside of that I do many character acts (Hermione Granger, Britney Spears, Theresa May, Marge Simpson to name a few), all carefully considered as they inform Lydia’s existence one way or another, particularly my Austin Powers Fembot homage which is as ‘sexually threatening’ as Lydia, I’d say.

And what’s your favourite?
Theresa was a lot of fun to make, matching her with a Roald Dahl The Witches narrative was such a joy to do – it’s a beloved film of mine and still chills me to this day. But my favourite is probably Hermione Granger from Harry Potter – it’s always nice picking on people using her preadolescent sass.

How do you get into character?
Totally depends on the character! Most of the time I just have fun with it, but sometimes it can be intense. Me and Alfie Ordinary were booked in Bristol to do a ’Silver Factory’ Andy Warhol themed night, in which we’d both appear as Andy and Edie Sedgwick. As it was a walkabout performance, I did a lot of homework on Edie and went a bit mad trying to replicate her and her more tragic elements – I think I barely ate on the day so I was already a bit lightheaded and not all there, I was desperately smiling around the club asking everyone if “they’d seen Andy anywhere”, when I’d find him he wouldn’t say a word to me and walk off. IT WAS A JOURNEY TO SAY THE LEAST!

What can we expect in your company?
This completely depends on where you catch me! At The Powder Room we usually make new material all the time, which will anything upbeat fun and always a bit dense.
Other shows I could be doing anything from being a ‘dumb slag’, your worst nightmare, or something utterly revolting to a song you know and love.

Do you get up as Lydia or Alex in the morning?
I think I’d have a complete nervous collapse if I woke up and saw Lydia in the mirror! I’m Alex by day, and the Mr (Miss) Hyde that is Lydia by night.

What inspires you?
I love female characters with a bit of malice. I’m really inspired by blonde villains and vixens, anything from Jennifer Tilly in Bride of Chucky, Anjelica Pickles, Regina George, Velma Von Tussle (sans casual racism), Cathy Moriarty in Casper, and Bernadette Peters in Annie.

Dream party guests – alive or dead?
Amy Winehouse, Marilyn Monroe, and Boris Karloff – definitely. Amy and Marilyn would bring the party, and Boris I owe everything for my initial love of horror – the flat-headed daddy that is Frankenstein’s Monster.

Should drag be political?
For me, drag is political from the get go, challenging what is perceived of gender norms through anyone’s chosen way of expression is already socially engaged and political, I’d say.
I’ve done some acts that present a critique on something, may it be today’s internet culture, the expectations of women, slut shame to name a few, but first an foremost it has to be accessible and entertaining.

Is the scene in good health?
Absolutely, I’d say it’s changed and developed a lot and there’s a lot going on now, which is lovely to see. Everyone has their places to be and everyone’s welcome to visit. I’ve a new love for the trad scene having played Charles Street Tap and visited many a night with my darling Alfie – working on contemporary stuff is great but reminding ourselves of the local roots is always lovely.

Anywhere exciting you can recommend?
I’ve heard there’s a new sexy night going on at Pop Vault on November 4. It’s called POLYGLAMOROUS. I may or may not be involved with some other local creative titans I call my near and dear.

Tell us a bit about your act Cinebra…
Like cinema, but with a bra – making it movie themed drag, started out with mine and Rococo Chanel’s first character duo, Sophie and Megan, two socially unfortunate college students with a mutual love of movies.

The first full length show Ro and I wrote together (music by her, script by me) is called A History of Horror which is an original horror comedy musical following the format of a Powerpoint presentation with a terrifying twist.

For our second show, under the Cinebra name, we moved on to (ex) movie stars Glenda and Rita – two golden era actresses who don’t get work anymore because they are physically black and white in a technicolour world. The show premiered at this year’s Fringe, and we can’t wait to do it again! (@wereallylikemovies on Instagram)

Where next for Lydia?
I’m content with what I’ve achieved so far, and I’m enjoying every new adventure. I would love to write a solo show for the new year though, and maybe build some material to translate into live sets as a solo, we shall see!