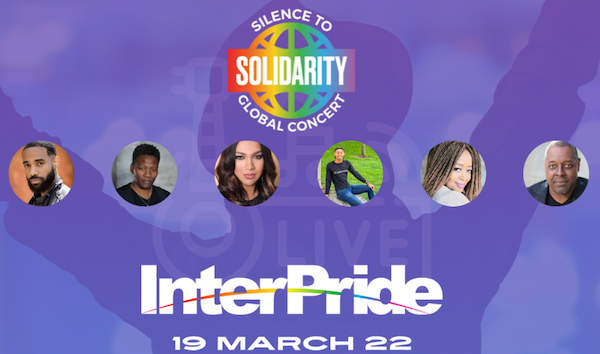 To support the needs of global LGBTQ+ communities and queer activists in Ukraine, InterPride will be hosting the Silence to Solidarity Global Virtual Concert on Saturday, March 19 from 7pm.

This 90-minute free virtual broadcast will be available worldwide through social media and Revry, and will include a diverse range of global artists, inspiring community leaders, celebrity champions, actors, and political activists.

Some of the confirmed talent: Nieri, a Milan-raised/LA-based artist ready to share his unique brand of pop with the world; Angel Bonilla, a Filipino transwoman who became the first transgender contestant on The Voice USA; Calpernia Addams, who has been entertaining and speaking out for almost 30 years on stage and screen in outlets including Sundance, the Oxford Union and Edinburgh Festival Fringe; and Philemon Chambers, who recently starred in the Netflix original movie, Single All The Way. Full line-up HERE

Linda DeMarco, Co-President of InterPride, said: “InterPride’s Legacy, Solidarity, and Scholarship Grants aim to help the LGBTQ+ community wherever possible. This concert is another means to raise money for these funds, but it’s also a chance to raise awareness about the need for these resources.

“Whenever possible, we should lend a helping hand to our community and the Pride movement. We are all responsible for ensuring global equality!”

InterPride would also like to show its support for its partners, KyivPride and Kharkiv Pride. A portion of the proceeds raised during the Silence to Solidarity Global Concert will go to these two organisations to support and assist the local Ukrainian LGBTQ+ community during this difficult time.

A clothing collection called Silence to Solidarity, collaboratively produced by InterPride and Queerencia, is also available to commemorate the event. A portion of the proceeds will also be donated to InterPride. These limited edition T-Shirts, tank tops, and hoodies can be purchased online HERE