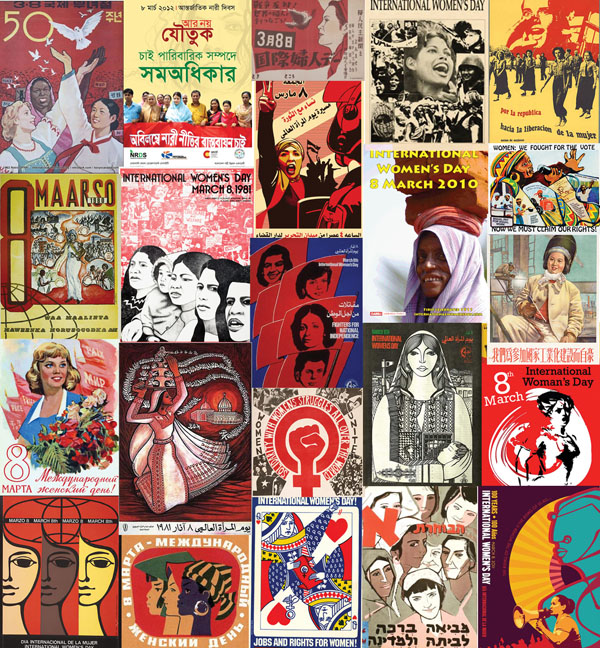 That particular day is actually pretty crowded, hosting as it does Peanut Cluster Day, Check Your Batteries Day and International Women’s Day alongside the aforementioned Proofreading Day. So, once you’ve fired up your laptop and ascertained that your batteries are indeed fully functional, enabling you to check and recheck your copy while getting some peanutty goodness into you, what will you do with the rest of March 8?

International Women’s Day is no frivolous newcomer to the annual calendar of events, having been around since 1911, but is it still really necessary today? After all, we have women politicians, women heading major businesses, women flying planes – for goodness’ sake, we’re even allowed on to golf courses, should that be our bag. So what’s all the fuss about? Gender equality is well and truly established.

Except, obviously, it really isn’t. Leaving aside all the countries of the world where women are still massively oppressed, the UK has a long way to go before there is true parity between men and women in many arenas.

Take a look at the International Women’s Day website and you’ll get just a flavour of where the battlegrounds still stand. The theme for this year is Make It Happen and the subcategories include increased financial independence; women in science, engineering and technology; fairer recognition of women in sport; greater awareness of women’s equality; and more women in senior leadership roles.

Women in the West still tend to be paid less than their male counterparts and they are not fully represented in politics and business. On a global level, the odds are still stacked against women in terms of education, health and violence. So do we still need an International Women’s Day? Damn straight we do.

International Women’s Day has recognised that there has been much progress in equality terms, especially since the turn of the millennium, and has, accordingly, shifted focus “from being a reminder about the negatives to a celebration of the positives”.

In many ways there are comparisons here to Pride. There will be those who remember running the gauntlet of taunts and the threats of violence while police lined parade routes in the political marches of the 1980s, while others will only recall the joyous carnival parades we have seen in recent years – celebrations of the achievements made in terms of equality that were a direct result of those political challenges.

And there are people who ask why we still need Pride. Well, it serves as both a reminder of what we have been through and as a celebration of what we have achieved. It also serves to highlight the fact that there are still plenty of countries – not to mention pockets of the UK – where homosexuality is still hidden and punished.

In these depoliticised times it’s encouraging to see there are still activists out there who are fighting for those less fortunate, even if their input is more about fashion parades than political ones. And it’s interesting to note that the UK – small as it is by comparison – leads in terms of International Women’s Day events, ahead of Australia, the US and Canada.

Indeed, here in Brighton and Hove we’re promised a programme of talks, music, dance, children’s activities and stalls, along with free workshops including “Women’s Self-Defence, Laughter Yoga, Speaking With Impact, crafts and more. Plus a panel discussion on women’s engagement with the political process”.

It’s a far cry from flinging yourself in front of a horse to get the vote, but the very fact that we no longer have to resort to life-threatening acts to get heard speaks volumes. It’s taken more than 100 years to get this far, and true gender equality is probably many decades down the line yet, but we’re in the game. Including golf. www.internationalwomensday.com

Brighton Women’s Centre will be celebrating International Women’s Day (IWD) on Saturday, March 7 at the Brighton Dome Café Bar, Church Street, Brighton, from 10.30 a.m. to 5 p.m. with a day of free entertainment, workshops and stalls. This year’s theme is Make It Happen, to encourage effective action for advancing and recognising women around the world. IWD has been observed since the early 1900s, when women’s oppression and inequality spurred them to become more vocal and active in campaigning for change. The first National Woman’s Day was observed across the United States on February 28, 1909 and it has grown into a global day of recognition and celebration across developed and developing countries alike.

Following the success of last year’s lively panel discussion, inspiring activists including Gemma Aitchison of the Yes Matters and #Enough campaigns and blogger and feminist campaigner June Eric-Odorie will discuss some of the key issues facing women today. Chaired by Brighton Women’s Centre patron Baroness Joyce Gould, the focus of the discussion will be women’s voting and political engagement in the run-up to the General Election.

Laughter yoga, self-defence and speaking with impact are some of the free workshops women can book on the day for a quick boost of confidence, energy and fun!

Browse the information stalls, enjoy some music, dance and spoken word or try your hand at some arts and crafts. If you have little ones, the Early Childhood Project will run all-day children’s activities for 0 to 12-year-olds.

If all that activity exhausts you, you can retreat to the chill-out zone, sample some relaxing complementary therapies, or hang out with friends over tea and cake in the café bar.

All the activities are in accessible spaces and there will be sign language interpreters.