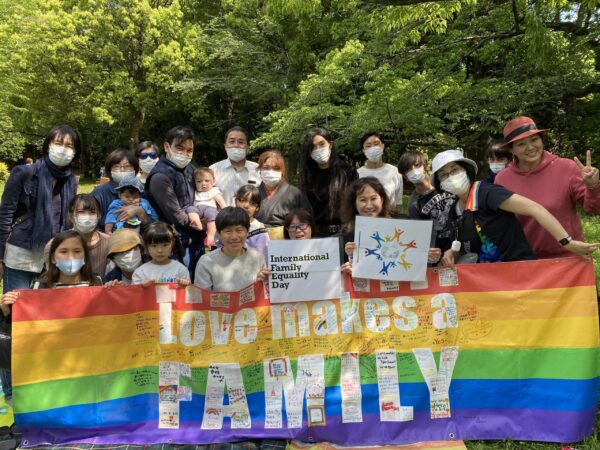 On the first Sunday of May, rainbow families around the globe, together with friends and allies, celebrated the 11th edition of International Family Equality Day (IFED) – an LGBTQ+ awareness day that highlights the beauty and importance of family diversity. This year’s motto, Family Equality is Everybody’s Business, drew attention to the fact that working towards equal rights for rainbow families and LGBTQ+ people in general is in the best interest of society as a whole. Just like its predecessors, IFED 2022 was a great success: It was commemorated in a record-breaking 237 cities in 71 countries.

Right to family life as a basic human right

Regarding this year’s motto, IFED co-president Matcha Phorn-In (Thailand) points out that in many places in the world, rainbow families are still facing unacceptable forms of discrimination. “In many ways, we’re families just like ‘traditional’ families. However, we’re often lacking economic, social and cultural support and protection. The right to family life is a basic human right for all citizens, irrespective of sexual orientation, gender identity or gender expression. It is therefore clear that advancing this right should be everyone’s business.”

Equality – a prerequisite for societal progress

To that, IFED co-president Benny Odongo (Kenya) adds that discrimination isn’t just stressful for affected minorities, but also a missed opportunity for society as such. “As long as societies allow discrimination, some of their members have to devote precious time and energy into survival. Hence, they cannot fully contribute to their community’s welfare and advancement. It is only when everyone feels safe and respected that a society can fully thrive. Therefore, everybody should care about equality.”

Another important point is mentioned by IFED board-member Taeko Yamada (Japan). “Rainbow families are not legally recognised in Japan. However, we do exist, and our visibility increases more and more. Therefore, through our presence alone, we’re becoming everybody’s business. What we need – nationally and globally – are powerful measures to raise awareness, build knowledge, eliminate prejudice, and promote protection and equal rights.”

IFED as a form of mutual empowerment

Matcha Phorn-In fully agrees: “My family and I, we’re strongly committed to and passionate about advancing family equality. It is our dignity and pride.” To her, commemorating IFED every year is an ideal way for the global LGBTQ+ community to empower each other as well as striving for political goals. “We’re already looking forward to IFED 2023! Join in!”