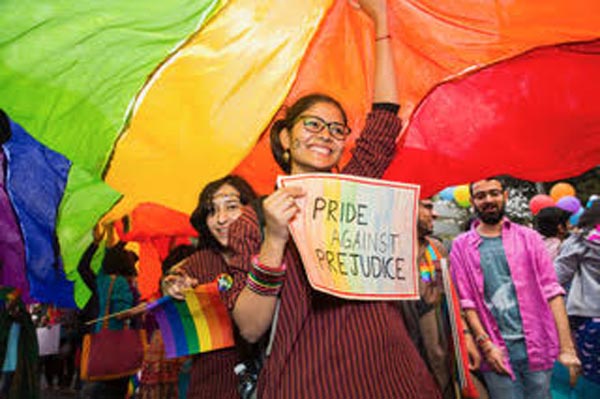 Historic judgement as one fifth of the world’s LGBT+ people set free from criminalisation.

THE Supreme Court of India made the historic decision to repeal the ban on same-sex relations on September 6.

The colonial-era Section 377 of the Indian Penal Code made sexual behaviour “against the order of nature” illegal and punishable by imprisonment and served as a model for similar laws across the British Colonial Empire.

India decriminalised same-sex relations in July 2009 by the High Court of Delhi after a movement to repeal the article began in the early 1990s. The ruling was overturned by a 2-judge bench of the Supreme Court of India in December 2013, ruling that Section 377 was not unconstitutional.

The new ruling comes after a five judge bench reviewed the case, after a petition was filed by a group of LGBT+ citizens with the claim that the earlier ruling needed to be reconsidered by a larger panel of judges. The petitioners also argued that the article violates one’s right to privacy, a fundamental right that was recognised in a landmark 2017 Supreme Court judgement.

Peter Tatchell, Director of the Peter Tatchell Foundation, said: “This historic legal ruling sets free from criminalisation almost one fifth of the world’s LGBT+ people. It is the biggest, most impactful gay law reform in human history. I hope it will inspire and empower similar legal challenges in many of the 70 countries that still outlaw same-sex relations, 35 of which are member states of the Commonwealth.

“Ending the ban on homosexuality is just a start. There are still huge challenges to end the stigma, discrimination and hate crime that LGBTs suffer in India.

“Indian LGBTs now revert to the legal status of non-criminalisation that existed prior to the British colonisers imposing the homophobic section 377 of the criminal code in the nineteenth century.”

Jessica Stern, Executive Director, OutRight Action International, the global campaign organisation, added: “When you work on LGBT+ rights at an international level, your work constantly leads you back to colonialism and the penal codes that were imposed globally as instruments of control and domination.

“The sodomy law that became the model everywhere from Uganda to Singapore to the UK itself premiered in India, becoming the confusing and dehumanising standard replicated around the world.

Today’s decision to strike down the 377 law once and for all is a triumph. It is the culmination of years of community organising, changing social attitudes, strategic use of the courts, and an LGBT+ movement in India that refused to give up.

“The decision decriminalises homosexuality in India and also affirms the rights to privacy and non-discrimination. Today’s historic outcome will reverberate across India and the world.”

The case was presented by Arundhati Katju and Menaka Guruswamy and the India Institute of Technology who filed a 716-page petition arguing that LGBT+ Indians have a right to determine their sexuality as a component of their privacy, dignity, and equality.

Menaka Guruswamy, said: “This is a wide-ranging win for LGBT Indians across constitutional rights of equality, dignity, expression and freedom. It is a win for India as a constitutional democracy, and the court with this judgment had told young LGBT Indians that they are not alone. Their court, constitution and country stands with them.”

Arundhati Katju, added: “This is a historic win. The Supreme Court has affirmed that the Indian Constitution applies with full force to LGBT+ Indians. As a unanimous decision passed by all five judges, this will have wide-ranging repercussions in the years to come.”