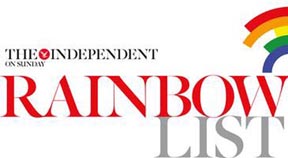 The Independent on Sunday nominations for its Rainbow List – the new name for the paper’s established annual Pink List close tonight, Sunday, October 26 at midnight.

THE PIONEERING list, now in its fifteenth year, celebrates The Independent on Sunday’s 101 most influential lesbian, gay, bisexual and transgender (LGBT) people in Britain with Nicola Adams, Clare Balding and Paris Lees among those to previously top the list.

Voting opened on Sunday October 5, and The Independent on Sunday is calling for people to submit their nominations for their LGBT heroes – whether they are in the public eye or are unsung champions campaigning for progress and equality.

Nominations will be whittled down to 101 and will be unveiled in The Independent on Sunday on the November 9.

The Pink List was initially established in 2000 and has become a widely embraced register of LGBT people who have worked hard to promote progress and equality in the UK. Previous honourees include Sir Ian McKellan, Alan Bennett, Sue Perkins and Nick Grimshaw. In celebration of its fifteenth year, it’s been given a new name, The Rainbow List.

Editor of The Independent on Sunday, Lisa Markwell, said: “Everybody loves a list, but the Rainbow List does much more than just entertain us. Since its inception in 2000 it has become a testament to the bravery, achievements and influence of individuals – it works to inspire and inform the rest of us. At The Independent on Sunday we take great pride in publishing the list, and it is an absolute pleasure to preside over it again. I can’t wait to hear this year’s stories, and take part in the lively judging session!”

You can join the conversation on Twitter at #RainbowList2014 and can nominate as many times as you like; nominations close at midnight October 26 and can be made via an online entry form at independent.co.uk/rainbowlist or by emailing rainbowlist@independent.co.uk with your suggestion and your reason why.