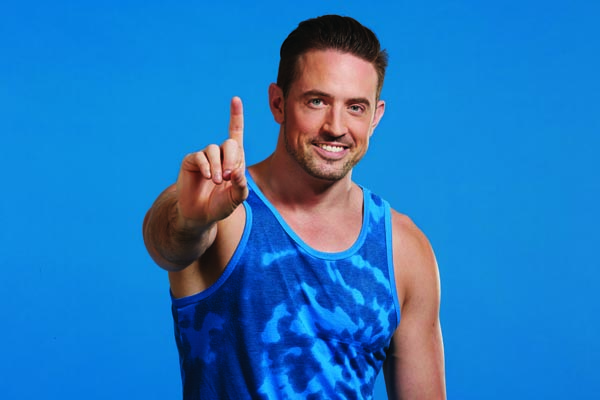 If you’re having sex, get tested for HIV during National HIV Testing Week from November 17-23!

When was your last HIV test?

IT’S National HIV Testing Week this month which means there’s no better time to get tested and know your status.

It’s recommended that gay and bi men test at least once a year and more if you’ve had unprotected sex or slept with more than one partner. Because you can live a long healthy life with HIV – but first you’ve got to get tested and know your status.

Head to startswithme.org.uk to find out where to test locally or to order your free self-sampling test, where you test at home and get a result within a few days.

With around 1 in 8 people living with HIV still unaware they have the virus, Gscene spoke to Paul and James about why they test regularly and decided to get involved in National HIV Testing Week this year.

Meet Paul: “We all have sex, we should all get tested”:
“The first time I had sex was when I was 18 and I immediately went and got tested for HIV in a panic,’ says Paul who’s now 33.

“I was scared, even though we used a condom. As a gay man, I’ve always been aware of HIV and it’s why I was keen to be part of this campaign.

“It took over a week to get your result back then, which seems crazy. Now you get peace of mind quickly and easily – which is amazing.

“People seem to see testing as something to be ashamed of, but it shouldn’t be. We all have sex. There are some great sexual health clinics and now you can test at home and get a quick result. Testing is something to be proud of!”

Testing for HIV can be nerve-wracking experience, but if you’re living with HIV you need to know about it so you can access support and treatment to live well.

“I’ve got three friends who have HIV and I’ve always tried to be very supportive of them,” says Paul.

“They’re absolutely fine and living well, but it seems other people who are really scared. Which is ridiculous because it’s 2018 and it’s not the same as it was 30 years ago – there’s no need to panic, you can live with it for the rest of your life.

“I think it’s important that more people know that those on effective HIV treatment can’t pass it on – with or without a condom – because it shows that the best thing to do is get tested and know your status.”

Paul’s a model, actor and now a personal trainer too. He knows first hand that many gay men now take a big interest in their physical health but doesn’t understand why everyone’s not prioritising their sexual health too.

“A lot of my friends who have HIV go to the gym all the time and work out and take amazing care of themselves. They see it as ‘a scare’ and then make a change to be as healthy as possible.

“I’m a personal trainer, I spend time in the gym and I eat well. We need to all see sexual health as being as important as physical health.

“My advice? Just go and get tested.”

Meet Isaiah: “I first tested for HIV at 17”
“I was having unprotected sex with my partner at the time,’ says Isaiah. ‘He tested regularly and was my first sexual partner, but I still decided I should start going to the clinic.

“The first time I tested, I was 17 and I’d gone after researching about HIV. As a gay man, I thought I should be more aware of HIV. Both for my own health and so I can educate friends. It wasn’t that I thought I had HIV, I just thought I should go and do it and get into the habit of it.

“We didn’t have a discussion about condoms, it was very heat of the moment. It was dangerous in this day and age when there’s lots available to you to protect yourself. I look back on it as something bad in terms of HIV and STIs. But luckily that’s not what happened.

James: I understand dealing with stigma:
“I’m trans and it’s very different to having HIV, but there’s a lot of stigma about being trans due to people not educating themselves about that and I think it’s probably quite similar for people living with HIV,” says James who’s 26.

“You read those dating profiles and it’s like “I don’t want this, this and this” and if we can just be a little bit kinder to each other and start a dialogue that’s really important.”

James wanted to be a part of National HIV Testing Week to promote testing within trans communities.

“I’ve done home tests before and it’s useful,” says James. “Sometimes at clinics you end up waiting around a lot, and so it’s the convenience of testing at home that I like. I think it’s always better to know and have peace of mind.

“Sexual health is a little bit more difficult for trans people, although London and Brighton both have trans specific clinics. But at standard places, it’s fine but there’s always that element of being confident enough to be open about being trans. I’ve had medical appoints where people haven’t reacted well to me being trans and used the wrong pronouns.

“But going to the clinic is never as bad as you think it’s going to be. I’ve had good interactions and even people who aren’t very clued up have been respectful. People see testing as embarrassing or shameful but it’s something to be proud of.”

National HIV Testing Week (November 17-23)
National HIV Testing week starts on Saturday, November 17 with loads of opportunities to get tested and know your status. Testing for HIV is quick, easy and confidential. For more information about where, when and why to test visit startswithme.org.uk.

National HIV Testing Week is part of It Starts With Me, the HIV prevention campaign run by Terrence Higgins Trust on behalf of Public Health England.

How to stop HIV

We’ve got all the tools we need to prevent HIV, it’s just about using them:

HIV is more prevalent among gay and bi men so it’s important to know about HIV and the different ways to prevent it. Testing regularly is a big part of that because you can live a long, healthy life with HIV – you just need to know you have it.

HIV treatment is also playing a significant role in bringing down new HIV transmissions as we now know that someone living with HIV who’s on effective treatment can’t pass it on – with or without a condom.

For more information about HIV and where to test visit startswithme.org.uk.