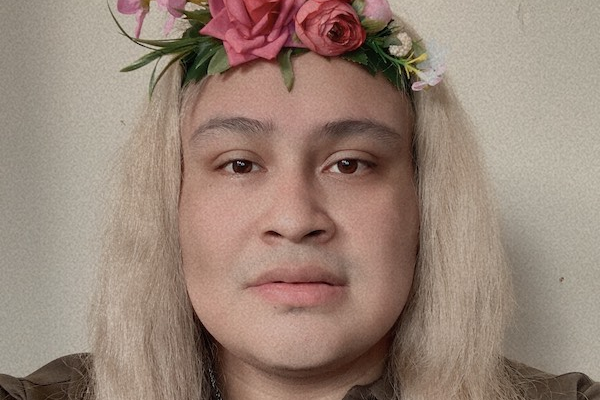 By Peter Markham, a correspondent with immigrationnews.co.uk and IAS, a group of lawyers which represents asylum seekers around the world.

Positive, uplifting experiences have been difficult to come by over the past year or so but my meeting with Arthur Britney Joestar is right up there. Theirs is a story which is heartbreaking yet inspiring. It also sets the scene for a bright future.

Arthur Britney, 29, was an asylum seeker from El Salvador who made history late last year. In a world first, they won an appeal to remain in the UK related to their non-binary identity.

Before I go on, let’s get the formalities out of the way. Arthur Britney likes to be referred to by the ‘they’ and ‘their’ pronouns. On the spectrum, they would say they are queer and gender fluid, meaning that sometimes they are very comfortable being a man, sometimes a woman and sometimes neither.

What’s quite clear from talking to Arthur Britney is that there had been a great big Britney longing to get out of them way before they arrived in the UK three years ago.

El Salvador has an appalling record when it comes to those who have minority sexual orientations or gender identity issues. It is a macho society that roots out men in touch with their feminine side and targets them with violence.

If you’re young, gay and you show it, you’re likely to end up being bullied out of school and leave with little education. Worse still, step out of line in adulthood and you stand a good chance of being tortured or killed.

In a landmark ruling last summer, a judge in the capital San Salvador found three police officers guilty of the murder of Camila Díaz Córdova and sentenced each to 20 years in prison. It was the first conviction for a hate crime against a transgender woman in the country.

Arthur Britney had always known they were different from a very young age. As a teenager, an inner turmoil over this led them to religion in an effort to ‘normalise’ themselves. It didn’t work.

“There was a point in my life when I said, ‘I cannot live this kind of life.’ I could not live a lie,” they told me.

They lived in a country which bunged anyone ‘different’ into one category. That meant identifying as being non-binary was a bit of a non-starter and so back then they identified as gay.

The consequences of daring to publicly express their real self even in a minor way were horrific. Firstly, they were severely beaten up by passing policemen simply for having bleached hair.

A fifteen minute walk to work along San Salvador’s bustling boulevards became a daily traumatic ritual with constant name-calling from complete strangers who threw bags of urine and rubbish at them.

Despite the beating and taunting, they managed to form a support network of open-minded friends with whom they could be themselves. The problem was that support brought with it a taste of freedom, making it more difficult to live a lie when out and about on their own.

There was only one thing for it. They had to get out of El Salvador. “It was devastating to leave my friends because we are really close,” Arthur Britney explained. “But, those friends knew what I needed to do and gave me the wings I needed to fly.”

Seeking asylum in the UK seemed a good call because their online research showed it was a country which would help those in their position. Tell the Home Secretary, Priti Patel that and one can imagine the rage. “Get me 100 techies right now! I want the UK moved down the google rankings as a safe bet for LBGT asylum seekers immediately.”

They were housed in Liverpool while their claim was processed. An eight hour interview followed with immigration officials and it was then that the grim reality began to hit home.

“I want to be really honest. At the beginning I wanted to believe that the Home Office were on my side, that they wanted to protect me. The truth is what they really wanted to do was get me out of the country.

“They skipped over the real issue which was the persecution I suffered and the evidence I was able to provide,” they told me. “I felt they didn’t take me seriously and they didn’t manage the evidence properly.”

What Arthur Britney wanted was to find a job but their status as an asylum seeker prevented them from doing this. Indefatigable, they gave up their time to work free of charge for the Many Hands One Heart charity which helps LBGT+ asylum seekers. They built up a massive support network and learned English along the way.

However, there was a huge setback. Their application to remain in the UK was rejected twice, and in double quick time.

“It broke me slowly. It was a slow torture,” they explained. “I had suicidal thoughts. I’m not ashamed to say that. At one point I said to myself that I’d prefer to die in the UK with dignity rather than go back to El Salvador and risk being tortured or killed.”

The saying goes that you make your own luck- never more true than for Arthur Britney. They were offered counselling by Many Hands One Heart to help them get through their asylum ordeal. The counsellor happened to be an expert in gender expression.

As the therapy sessions wore on, Arthur Britney realised that they were non-binary and, until then, had just never had the strength or opportunity to be fully open about it.

With the help of a determined lawyer, Kristian Wood of IAS, their case was reopened. By now Arthur Britney’s new non-binary identity was at full throttle. Their Britney persona was flying and they’d become an activist, even rubbing shoulders with Prince Harry at a conference in London.

The publicity they’d built up meant they’d be a sitting duck for willing gangs or the police to attack them if they were returned to El Salvador. Evidence of their new identity was added to their file. Nonetheless their case was rejected by a further tribunal.

More Arthur Britney luck came to the rescue. The judge who heard their appeal was smart, enlightened and just ‘got it.’

The eyes of their team lit up when they saw it was Judge Bruce who’d be hearing the appeal. She criticised previous decisions that the police attack against Arthur Britney had not been persecution.

“It was a physical assault, by the police, motivated by nothing other than homophobia,” Judge Bruce said. “Five minutes is a long time to be beaten. I do not doubt that it was for the appellant a terrifying experience.

“Having had regard to the country background evidence,” she concluded, “and the evidence personally relating to the appellant, it follows that the appeal must be allowed.” The judge’s decision sets a precedent in black and white, Kristian Wood explained, offering hope to future applicants.

Judge Bruce also flagged up that previous hearings had been wrong to use the pronoun ‘he’ when referring to the applicant.

“The way the judge handled the case: she just understood me, all the tiny details. She saw the whole picture,” Arthur Britney said afterwards. “At the end, she turned to look at me and started speaking to me in Spanish, to tell me she granted me the right to stay in this country and the right to be who I want to be. I just started to cry. I felt like I was born again.”

The very next day, Arthur Britney was offered and accepted a paid job.

During my interview with Arthur Britney they recounted another extraordinary story. You may have already guessed that they’re a Britney Spears obsessive. A couple of years ago they spent hours queuing outside a venue in Scarborough for tickets to see their idol.

Arthur Britney knows their namesake’s every dance move and proudly showed them off in the queue to the sound of the band rehearsal. They were spotted by one of the dance troupe who was in awe of their skills and impeccable Britney impersonation.

What followed was a front row middle seat a few metres from the superstar. It’s hard to tell from the story who was more excited to see who. “It was a spiritual moment for me that helped me to heal from my past,” they explained.

What is striking about Arthur Britney’s journey is how often they were so badly let down by the very people who were meant to protect them, namely the El Salvadoran police, the UK Home Office and the British officials who heard their initial cases.

Were it not for Kristian Wood’s dogged perseverance and the fact that Judge Bruce happened to be on duty for their appeal, Arthur Britney’s story could quite possibly have had a very tragic ending.

In a nod to songs that have been sung by countless drag queens, when it comes to Arthur Britney, they are what they are, this is their life and, may I say not in a shy way, they did it their way.

Arthur Britney, your very presence makes the world a better place: Home Office, take note. Vive la difference! Now I’m off to write the screenplay before someone else beats me to it.