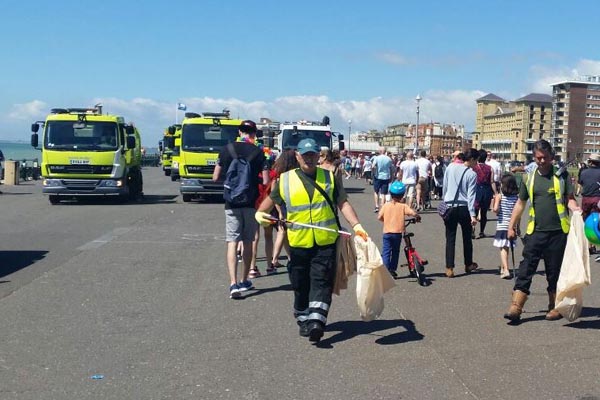 Brighton & Hove gets back to normal after one of the busiest and hottest bank holidays on record.

AN estimated 300,000 people flocked to the city to enjoy the beaches and parks, and soak up the fantastic weather.

The Children’s Parade, Hove Lawns food festival and the start of the Fringe and Festival month, also helped draw in more tourists than virtually any other bank holiday weekend adding to the tens of thousands of residents visiting the city’s open spaces and seafront.

Councillor Gill Mitchell, chair of the city’s environment, transport and sustainability committee, said: “It’s great to see so many people coming to our brilliant city and enjoying all the facilities we have. It was one of the city’s busiest bank holiday weekends ever.

“But the city’s popularity also means vast amounts more litter and waste being left behind on our beaches and dropped on our streets, and the demand on our street and beach cleaning teams was extremely high.

“The teams have been very busy all weekend and carried out an amazing clearing up job, working from the very early hours in the morning and through the day until late at night.”

The council’s waste and street cleansing teams collected an estimated 20 tonnes of waste (equivalent to 250 sunbathers) from the city’s beaches, and have been working round the clock to ensure the streets are litter free.

Sue Johnson, Secretary of Friends of Hove Lagoon sent an email to CityClean, the council’s cleansing department: “I just wanted to express my thanks to everyone at the council who has made Hove Lagoon litter free.

“I walked around at midday on Tuesday and was really surprised and pleased to see all the bins had been emptied and with very little stray litter. This is amazing after what must have been a horrendously busy weekend.

“I’m the first to complain, so I wanted to give praise too!”

Dan Stockland, of the Big Beach Café at the Lagoon, also emailed: “Thank you so much for a job well done! “The large yellow bins worked at treat. Thanks you guys, much appreciated. We had a record-breaking weekend.”

The council received complaints about overflowing bins over the weekend.

“If a bin is full, we would ask people to find another one – there are lots of big black bins on the promenade – or take their rubbish home with them.

“Leaving it on the beach or beside an overflowing bin is not acceptable. It’s everyone’s responsibility to keep our city clean.”

Normally, bins are emptied at least once daily, and this increases to at least twice a day in the busy summer period.

Cllr Mitchell added: “We will be using extra staff resources by the end of May and beginning of June which will help with litter picking on the beach and street cleaning.”