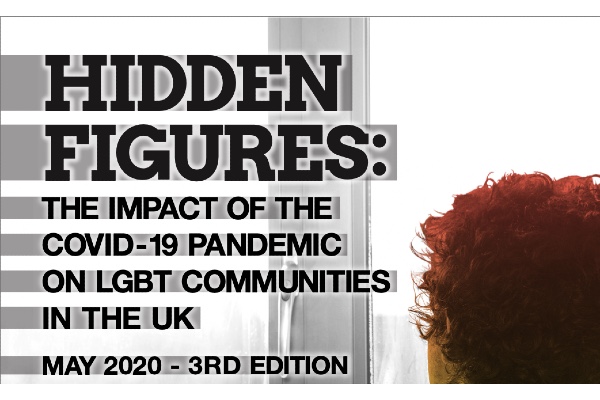 The LGBT Foundation have reported on the impact of Covid-19 on LGBT communities across the UK following a detailed survey. The research uncovered concerns around isolation, mental health, substance misuse, eating disorders and personal safety. Key findings include 64% would rather receive support from an LGBT organisation at this time and that 42% of respondents would like to access mental health support.

Noting the general societal impact of the pandemic and the increased recognition of the disproportionate affect on the Black, Asian and Minority Ethnic (BAME) communities, the Foundation`s report seeks to address the omission of LGBT communities from the wider narrative. 30% of respondents are living alone with this rising to 40% amongst hose aged 50+. Respondents living previously more authentic lives have been forced by pandemic circumstances to living with hostile families leading to a retreat of their identity. Additionally, there have been instances of people being made homeless during the crisis after their families have found out they are LGBT.

Many LGBT people rely on LGBT communities and spaces for vital support, understanding and friendship. Therefore a lack of access to LGBT specific spaces and a reduction in people’s ability to socialise with other LGBT people is heightening isolation in these communities and making people feel that their LGBT identity is becoming invisible.

Tristan (not his real name) lives with a room-mate, who has coerced him into performing a sexual act and has continued to try and initiate unwanted sexual contact. The room-mate is homophobic and Tristan believes that he assumes Tristan wants to have sex with him just because Tristan is LGBT. The room-mate can get aggressive, however due to Covid-19 there is nowhere else available for him to stay at the moment..

Alex (not their real name) has been a regular caller since the Covid-19 crisis began. They called the helpline asking for numbers for housing support as they are continuing to experience abusive language from neighbours. They have had  contact with the police, who were unable to help. They also have a support worker, but the support worker doesn’t know that they are LGBT and they don’ feel supported by them.

LGBT Foundation is a Manchester based national charity that started in 1975. The previously published a report about the health inequalities of LGBT people drawing on data and stories from their 40,000 service users.