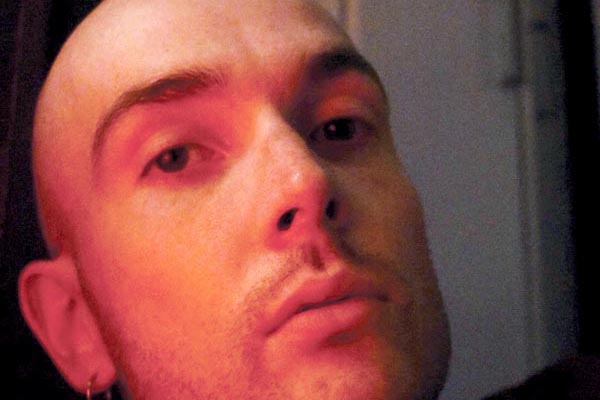 Craig Hanlon-Smith caught up with Ashley in the run up to his exhibition Songs of New Women to talk art and queer identity.

VISUAL artist Ashley Beachey studied and now lives in Brighton. The recent exhibition created and curated by Ashley in December, Songs of New Women, centred around stories of femininity, wise women and trans identities. The influences of Ashley’s home country, Wales, is another core feature in the work.

You describe your work as ‘Welsh Art and Femme Witchcraft’, ‘Non-Binary’ and ‘Queer-Art’. Explain that in more explicit terms…

The work I make is informed by folkloric storytelling and my own personal experiences regarding gender identity. Femininity is very important to what I do and so I like to use it in the creative process. I’m interested in the idea of self-reclamation involving the concept of witchcraft, a way of creating something that inherently at its core fights to dismantle patriarchal oppression, especially in regard to power and masculinity. Folklore and witchcraft also have a rich vein of symbolic representation when it comes to femininity and so I find it fascinating to parallel this subject with my own personal gender identity. Coming from Wales, there’s already a plethora of source material to reinterpret, but I think it’s time that Welsh folklore made room for some more contemporary folk storytelling. I want to make images and stories that push the gender boundary and wear femininity as a suit of armour.

You live here now, but originate from Wales. How have those worlds underpinned your development as an artist?

I was born in Abergavenny and spent my childhood growing up in Cardiff and Carmarthenshire near the coast. I moved away around 10 years ago to study Fine Art Painting at Brighton University. Back then I was very interested in images that focussed on transgressive symbology and performativity in painting and gender and was especially interested in the works of artists like Cecily Brown, Derek Jarman and the literature of the Marquis de Sade. Many years have passed and I’ve grown more interested in Welsh history and the fairytale as a creative form as well as witchcraft and its role in female emancipation. My artistic influences also changed as I became more drawn towards artists such as Paula Rego, Maya Deren and films like The Mirror by Andrei Tarkovsky.

Authors like Angela Carter and Ludmilla Petrushevskaya also had an enormous impact on me, Carter in particular for her feminist reinterpretations of folkloric history. I grew more confident in how I was personally identifying as largely female rather than male – something I’ve struggled with for a long time. All this sort of just came together and went on to inform much of what I do and make now.

Tarot readings were a significant feature in your exhibition. What’s your interest?

I’ve been learning how to read tarot for the past few years. I took it up as a way to cope with anxiety and depression. However, I don’t use it to predict the future, I use it as a pictorial key or a tool to practice mindfulness. I started to unlearn a lot of what I’d taught myself over the years and embraced a more inclusive, queerer way of using Tarot systems. Thankfully there’s been some amazing people who’ve helped me build upon a more contemporary reading style, one that breaks down heteronormative binary systems, gender and imagery that LGBTQ people may find difficult to identify with. Many people have been using tarot systems much more over the past few years as a way to look beyond the fringes in a world where the political climate grows more unstable and minority groups are being increasingly silenced. Tarot may provide a comfort to those people through the art of storytelling. Sceptic or not, its cultural impact is not to be sniffed at.

The LGBTQ communities are ever-developing and evolving, and at quite a pace in recent years. What are the challenges facing your communities in 2019?

Trans communities have experienced some seismic changes over the past five years which is extremely encouraging. However, this past year has showcased some pretty awful swings to the right, especially in regard to a backlash against issues that the trans community have fought so hard for. The backlash in right-wing media against younger people identifying as transgender has been particularly upsetting.

You expressly select the word ‘queer’ to describe your work which must then in turn be strongly linked to your own identity. ‘Queer’ is a term that was regularly thrown around in the 1950s/60s/70s specifically to describe, essentially, gay men. In the early 1980s, certainly, it was adopted by the gay male community as an endearment of power and self-authority in the face of growing and state supported discrimination. Why do you think this term has returned and how do you suppose its meaning is now different?

We’re living in very uncertain times, the term ‘Queer’ can stand for a power of resistance. Resistance against oppressive patriarchal structures and reductive heteronormative ideology that stands in the way of living in a place of respectful inclusivity. I think its contemporary meaning is very different and I think that’s great. It gives people a word in which they can feel safe and powerful. Its inflammatory nature can make it difficult to take on as a term to identify with and I do understand that, but its power to challenge shouldn’t be underestimated.

What are your ambitions for yourself over the next 10 years either as an artist or otherwise?

I am terrible at making 10-year plans… Or even five-year plans. I’d like to make an illustrated book of Fairytales.

Do you have any LGBTQ role models?

I don’t like having role models really but there are lots of LGBTQ people whom I greatly respect. I’ll pick just one for now and say Jeanette Winterson largely for her novels that explore gender and sex and if I might give a shout out to the excellent book, Written on the Body.
As we begin a new year with many political challenges ahead, any fears for the future?
Complacency.