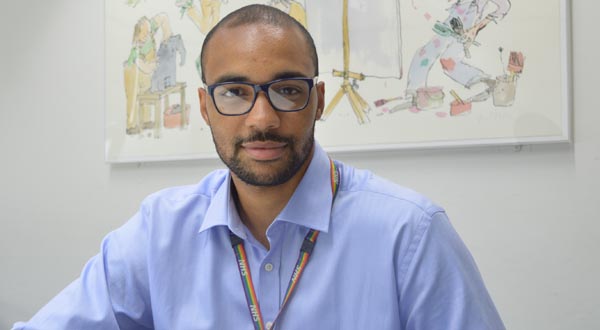 When he was younger, David Van De Velde had no one to turn to on Lesbian, gay, bisexual and transgender (LGBT+) matters.

That’s why the clinical team leader, and qualified mental health nurse wears the rainbow lanyard with pride. The following is an excerpt of an article that will appear in full in the next issue of the CNWL (Central and North West London NHS Foundation Trust) Body and Mind magazine.

“For me, the reason I wear it now is to try to help others in the same situation, because I didn’t have anyone to help me with that.  It’s about trying to change things from the ground,” he says.

The colourful lanyards attached to staff ID badges were introduced across the Trust in February 2012, as a voluntary way for staff of any sexual orientation to indicate that they’re a ‘safe listening ear for LGBT service users.’

And David, who was recently elected co-chair of the Trust’s LGBT network knows first-hand that the lanyards work.

“Because I’m wearing the lanyard they feel comfortable enough to confide in me and ask me things, for information or talk to me about things they wouldn’t be able to talk to anyone else about for fear of judgement,” says David.

LGBT+ patients who approach David tend to have common concerns and questions, including where to find support for abuse, identity crises, loneliness and suicide, and how to connect with other LGBT+ people.

LGBT patient experience
The lanyard initiative was rolled out after a 2012 survey found that a majority of patients at The Gordon and St Charles Hospitals didn’t feel supported or able to disclose their LGBT+ status to hospital staff.

The Trust wanted to change this. The LGBT+ Allies got to work. It introduced the rainbow lanyards across the Trust, and a number of measures aimed at tackling the issues, including a communications campaign and training sessions for staff, led by LGBT+ advocates.

Alison Devlin, Equalities and Diversity Manager requested another survey in 2015/2016 to see if anything had changed for patients. The results were far better, with an increase in patients saying there was no issue around their + status. Patients said the rainbow lanyards were positive and reported feeling safe around staff wearing them.

LGBT and an ethnic minority
At the moment, David’s on a rotational programme where he gets placed in four different specialisms across the Trust every six months, so he gets around a lot. Despite the good that he’s doing, he admits that he’s been subject to abuse when wearing the lanyard, because he’s not just a member of the LGBT+ community but also an ethnic minority.

“People hurl homophobic abuse. People from part of my racial background (in my case, I’m mixed-race) saying that I have made the wrong choice and that sort of stuff. You get a lot of abuse from people but I’m not doing it for them. I’m doing it for the four or five people who come to me a week, and that could be the moment it changes their life,” he says.

“I did get some negative abuse by patients who didn’t understand it. I mean a lot of them would come and apologise later but I think it’s worth it though because if you can save someone from killing themselves because they don’t accept who they really are, and they can confide in you. I did actually have a case like that where somebody came forward, who I don’t think had worked out himself who he really was yet. I think if he had not had that contact… because before he came in he had tried to commit suicide as he wasn’t happy and his family weren’t happy with his direction. I think that by seeing the lanyard he was able to come and speak to me about things and I was able to give him more information.”

David is now the face of a new Trust campaign to promote the rainbow lanyard that are being displayed in all Trust sites.

You can read the full article in the next issue of the Trust’s Body and Mind magazine, out soon.