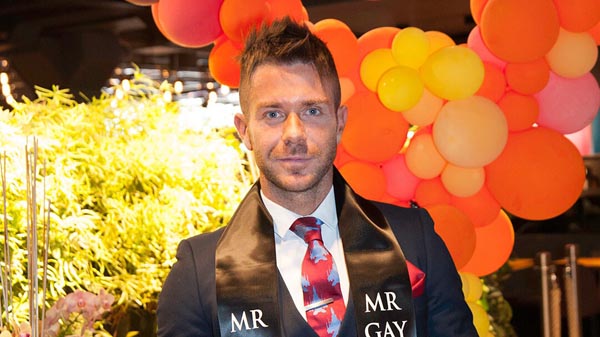 Matt who has a dog walking business in Brighton & Hove won the Social Media Challenge (SoMe) and My Project challenge, he came second in the preliminary interview, the photo challenge and the sports challenge. He came third in the written test and forth in the online vote. His total score came to 845 out of maximum 1200.

The result was announced at Pride Park in Stockholm, Sweden, during Stockholm Pride, August 5, 2017.

Tore Aasheim, the MGE president, said: “Matt Rood is one of the most dedicated and hardworking gay activist that I have had the honour to get to know through Mr Gay Europe,

“With his big heart, his kind attitude but also strong devotion, and with a project that shows that he really put his money where his mouth is, Matt both showed us his commitment and the fact that you don’t need to be a twink to win Mr Gay Europe.”

Matt said: “I would like to thank everyone in Brighton & Hove who voted for me.”

Matt’s campaign for the competition was called Pride Families and for three years he was a foster carer helping ten children. He wants to use his new title as Mr Gay Europe, and his experience as a foster carer as a platform to promote awareness showing that LGBT+ people can adopt and foster children providing them with loving, safe and nurturing homes.

In September, he will be working with Brighton and Hove City Council to launch a new fostering and adoption campaign.

He added: “I believe the only way to combat discrimination in future generations is to work with children and teach them through respect, happiness and love for each other.”

In June this year Matt presented awards for favourite entertainer and favourite cabaret venue at the Golden Handbag Awards at the Brighton Metropole Hilton Hotel.

Next year, the finals of Mr Gay Europe will be staged in Poland for the first time from August 4-12, 2018

President Tore Aasheim President of Mr Gay Europe, said: “By organising Mr Gay Europe 2018 in Poland we want to send a message to the gay community in Europe; that we need to stand shoulder to shoulder and support our brothers and sisters all over the continent and will be a great opportunity for delegates to learn about Polish traditions, customs, culture and politics.”

Pawel Zabilski, Director of Mr Gay Poland who will host the 2018 event, said: “To be asked to organise such a prestigious and large LGBT event in Poland is a great honour. I want to thank the whole team of Mr Gay Europe for their trust and support. We will do our best to make the competition a success.”