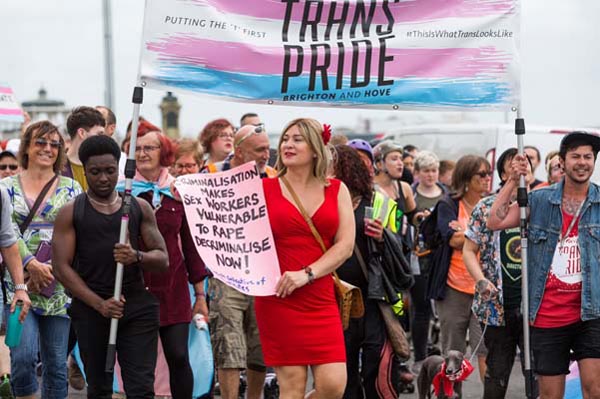 Brighton and Hove Green Party will march in solidarity with the city’s trans communities today, August 21, at the annual Trans Pride Brighton March.

TRANS Pride Brighton is now in its sixth year with the number of attendees growing year on year. Last year over 2,500 people marched to promote equality and celebrate gender diversity.

The Green Party will march in solidarity to demonstrate their continued support for trans people, and that Brighton & Hove will not tolerate messages of hate against the LGBT+ communities.

With the slogan Putting the T First, the annual protest march highlights that trans rights are human rights and seeks to eliminate any discrimination that trans people face. In 2017, more than a third of all trans people in the UK were victims of a hate crime, and it is thought that many more incidents go unreported.

Caroline Lucas, Co-leader of the Green Party and MP for Brighton Pavilion, said: “I’m sorry I can’t be with you in person to mark Trans Pride in Brighton. However, I am very much with you in solidarity. Together, we can continue to challenge stigma and eliminate discrimination against trans, non-binary, intersex, gender-variant, and gender-queer people.

“With the media continuing to demonise trans people, as well as fuelling misunderstanding in the debate around the Gender Recognition Act, even in Brighton where we’re known for our acceptance and for embracing diversity, it’s more important than ever to be visible. More important than ever to champion trans rights and to celebrate the brilliance, the value, and the courage of the trans community.

“The “Nothing About Us Without Us” message behind Trans Pride this year is especially important. Trans voices must be heard. Only by truly working together can we successfully overcome fear about gender identity and challenge prejudice, discrimination and exclusion. The need for change is urgent and today we celebrate what’s been achieved so far, as well as look to the future.

Councillor Phélim Mac Cafferty, Convenor of the Green Group of Councillors, who will be attending the march, said: “For the sixth year running, we will be proud to march with the trans communities at this year’s Trans Pride. The Green Party has a long tradition of proudly supporting our trans communities and will continue the call for equality and an end to discrimination.

“In 2012 Greens established the first Trans Equality Scrutiny Panel in the city. The work was ground breaking – shining a light on the issues that trans people face, from bullying in schools to hate crimes, housing, health and employment. Six years on and that work has led to some significant change: the first health action plan to include the trans community; a toolkit for our city’s teachers to educate pupils about transphobia; working with Sussex Police to improve hate crime reporting.

“Trans people still face a totally unacceptable level of discrimination, prejudice and ignorance and there’s still a lot of work to do if we are to achieve equality for trans people. We need to improve access to medical services and strengthen hate crime laws to tackle harassment. Greens remain fully committed to making trans equality a reality and with the trans community we will push together for a fairer future.”

Stonewall figures show the challenges that trans people still face in UK society – eight of ten young trans people self-harm or attempt suicide and 41% have experienced hate crime based on their gender identity in the last year.

Keith Taylor, Green Party MEP for the South East said: “But progress is being made. After the stellar work of trans rights activists, starting right from the beginning with Marsha P Johnson – the World Health Organisation has this year finally changed its classification system to confirm that trans people are not suffering from mental illness. And, while we should most certainly celebrate this achievement, there remains much hard work to be done – there are still 14 countries across Europe that require sterilisation when legally registering gender change, despite this being in violation of European human rights law.

“Through my work in the cross-party group for LGBT+ rights in the European Parliament, I will fight protect, uphold and enhance trans rights across the South East and beyond.”

To join with the Greens on the Trans Pride March gather this Saturday, July 21 at the Marlborough Pub and Theatre in Brighton at 11:30am to hear some speeches from trans rights activists and campaigners.