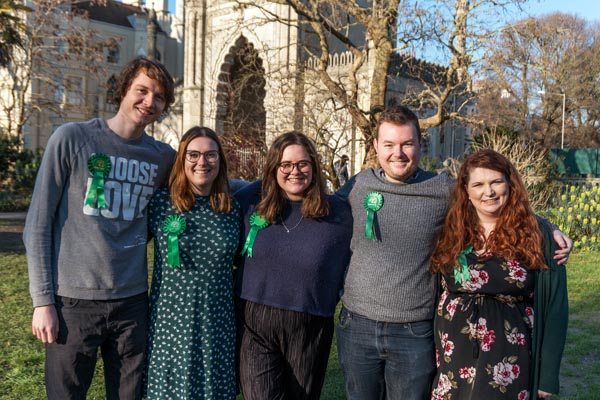 Ahead of the Brighton & Hove City Council elections on May 2, Brighton & Hove Green Party have unveiled a team of five young people who are hoping to join the city council.

THEY are Hannah Clare (25) in Brunswick and Adelaide, Amy Heley (23) in Preston Park, Raphael Hill (22) in Goldsmid,  Alice Bennett (22) and Martin Osborne (25) in Hollingdean and Stanmer.

The announcement follows the YouthStrike4Climate, march which took place on February 14.

Martin Osborne,  is an engineering doctoral student based at the University of Brighton. He is also Young Greens co-organiser on the Brighton & Hove Green Party Executive and is standing in Hollingdean and Stanmer ward.

Martin said: “Our climate crisis is big, but young people can provide a fresh, imaginative and positive view, and demonstrate the dynamism required to get stuck in and back up the talk with action. We’ve recently seen just how effective young people can be at the youth strikes for climate and we will continue to act to guarantee that our future is bright rather than gloomy.”

Alice Bennett, also standing in Hollingdean and Stanmer is the co-convenor of Brighton and Hove Young Greens and is completing an MA at the University of Sussex.

Alice added: “I hope to help ward members with any problems no matter how big or small, but I am particularly interested in strengthening the voice of those who have disabilities, both mental and physical. Hollingdean and Stanmer also has some beautiful green spaces which I would love to see flourish.”

Hannah Clare, candidate for Brunswick & Adelaide is the Young Greens co-organiser on the Brighton & Hove Green Party executive and works as Digital Communications Manager for a local charity. She was formerly Co-Chair of the Young Greens of England and Wales.

Hannah said: “It’s not going far enough to have policies that are aimed at young people alone. If we are to protect the future of young people in the city, then young people must be involved in those decisions. For too long, politicians have failed to represent the views and needs of young people – and it’s time for a change.”

Amy Heley, candidate in Preston Park ward  is a final year student. She currently sits on the executive of the Young Greens of England and Wales and works for Our Future Our Choice, a campaigns organisation seeking to involve the voices of young people on Brexit.

Amy said: “I put myself forward for election because I’m passionate about getting more young people engaged and involved in politics. If I become a councillor, I hope to be a voice for the students and young people in the city who have been let down by cuts to youth services, the housing crisis, the lack of mental health support and the uncertainty about the future that austerity and Brexit have brought.”

Raphael Hill, candidate in Goldsmid ward is the co-convenor of Brighton and Hove Young Greens and a trained teacher of English as a Foreign Language.

Raphael said: “I want to give people hope that their voices will be listened to. I want to support residents over their concerns on major building developments, including Lyon Close – issues like excessive height and density.  We must fight to use the precious land we have to build housing with social rents and council housing, not barren tower blocks nobody can afford. I love and cherish our community and I will fight to protect it for all residents.”