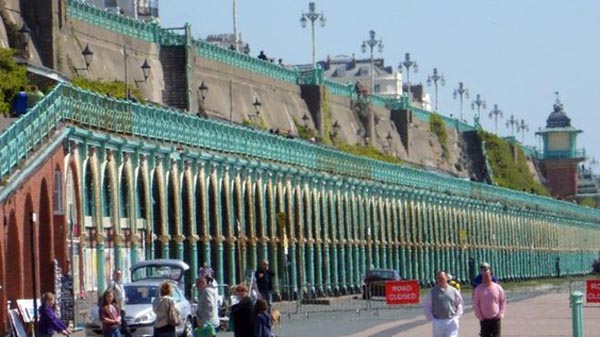 Council leader Warren Morgan has written today to the Tory MP for Brighton Kemptown, Simon Kirby expressing his anger at the decision, saying the government had let the city down badly.

The council had planned to use the funding towards a £24 million project to restore the crumbling Madeira Terraces on Brighton seafront, turning them into shops, cafes, galleries and a hotel.

Councillor Warren Morgan, Leader of the Council, said: “I am bitterly disappointed and angry with the Government. Yet again they have let us down, first they failed to invest in our rail infrastructure, now they are failing to invest even a modest amount in our seafront heritage and tourism infrastructure. This was seed funding that would have enabled us to get going on the project with private investment and matched funding from the city council. Our bid was strong and the response before today was positive, so I cannot understand why the Government has let us down so badly. Our local MP and Government Minister Simon Kirby has some serious questions to answer, and serious questions to ask his Conservative colleagues about why they think Brighton and Hove does not matter. I will be writing to Simon Kirby for his urgent response.”

His letter to Simon Kirby MP, he wrote: “Dear Simon, I am writing to you with regard to the bid from Brighton and Hove City Council to the Government’s Coastal Communities Fund for £4m worth of funding to start the project of restoring the Madeira Terraces, which appears to have been unsuccessful. Despite announcements around successful bids being announced around the country, we do not appear to have been informed directly that our bid has been rejected by ministers.

The £4m we asked for, a modest sum in relation to some other bids, would have kick-started this £23 million project to restore this much-valued stretch of Kemp Town seafront to its former glory, providing a home for new businesses and artists, triggering further public and private investment needed to complete it, and giving a major boost to our local economy and tourism in Brighton.

I am bitterly disappointed at the way this has been handled by Government, and that we have not secured funding despite favourable responses up to this point. Can I ask you to make urgent representations to your ministerial colleague and Secretary of State for Local Government Sajid Javid as to why this bid has been rejected, and what alternative sources of funding your Government will offer to enable us to undertake this essential project in your constituency.

Due to the public interest in this issue, I will be publishing this correspondence, and will of course share your reply.

Simon Kirby, MP for Brighton Kemptown, commented to Gscene: “I have immediately taken up this matter with DCLG. I have always been a strong voice for Brighton Kemptown & Peacehaven, happy to work with all local councils and will do my best to continue to lobby for the money.”