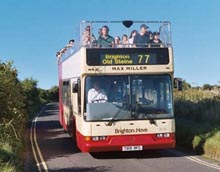 New bus timetables, which come into effect on April 21, will provide even more opportunities to travel in and around Brighton & Hove by public transport, whether for work or pleasure.

The number 77 bus, part of the ‘Breeze up to the Downs’ service which links the city to the surrounding countryside, will run twice an hour on Saturdays, Sundays and public holidays from April 21 and from June 22 until September 1 will run every day, with open top buses.

‘Breeze’ buses 78 and 79, which go to Stanmer Park and Ditchling Beacon respectively, will run hourly on Saturdays, Sundays and public holidays and, following a successful trial, the 79 bus will have two spaces for bikes on board. The only time the 79 will not run this summer is on June 16 when Ditchling Beacon will be closed for the London to Brighton Bike ride.

The number 52 buses from Woodingdean and Ovingdean to the Marina will run 15 minutes earlier, following consultation which showed this would help commuters with their connections into Brighton. The 52 is run by The Big Lemon under contract to the city council.

On other routes, there will be increased frequency from Hangleton during peak times during the week, as well as an improved service to and from Mile Oak on Sunday mornings. Westdene will also see improved early morning frequency on the 27 route to ensure better train connections.

“There’s never been a better time to travel by bus in Brighton & Hove, whether you want to take in the scenery on a trip to the Downs or use the service to travel to work or the nearest train station.

“The bus routes are extensive and many of the improvements to the new summer timetables have been made at the suggestion of Brighton & Hove Buses’ passengers or bus drivers.”

For coastal commuters into the city, there will be an additional limited stop bus (12X) from Eastbourne in the mornings, together with another 12 to cover the additional stops, starting at Seaford, plus an extra afternoon 12X from Churchill Square at 5pm.

The 12 route which covers Eastbourne to Brighton, will also benefit from extra journeys on Sunday evenings.

An earlier bus (23) is being laid on from Lewes Road to the Marina for people starting work at the Royal Sussex County Hospital at 7am.

For those travelling to the city from Lewes, there will be an extra morning peak journey to Brighton during the week on the 28/29 route.

Improvements and an extra weekday journey will be provided on the busy 25 route which goes to the universities.

The last bus to Hollingbury Asda (24) will continue to Woodbourne Garage to provide a better late night service to people in that area.

Some bus services have altered times for better connections with rail stations and to improve reliability.

•    Starting Easter weekend, city residents can travel out to Sheffield Park Garden and the Bluebell Railway on new or extended weekend services offered by Compass Bus (121 from Lewes on Saturdays or 769 from Brighton or Haywards Heath on Sundays and bank holidays). The 769 also serves Pyecombe, Hassocks, Burgess Hill, Scaynes Hill and North Chailey.