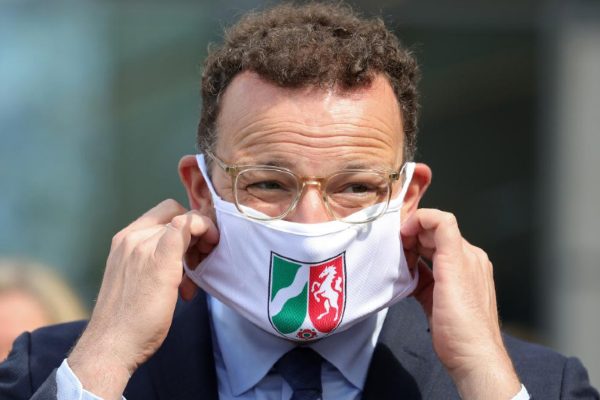 Germany`s health minister has been spat at and verbally abused by anti-lockdown protesters. Cries of “shame and “gay pig” were hurled at a pre-local election event in Bergisch Gladbach, North-west Germany at Jens Spahn, of the ruling Christian Democratic Union(CDU). Spahn is an out gay conservative who became Federal Health Minister in 2018. He had taken off his face-mask in order to to speak but was drowned out by the homophobic abuse.

After video of the attack emerged, the economy minister Peter Altmaier took to social media to express outrage at the attacks “Anyone who spits at and molests democratically elected politicians infringes the German constitution and makes an outsider of themselves” he said on his Twitter feed.

Spahn told the Rheinsiche Post that “a dialogue must be ensured between officials and coronavirus deniers. But it only works if both sides are willing to listen When people shout, spit and insult each other, it just doesn’t work.” Sphan has increasingly become the target for anti-lockdown protesters as he is the one delivering public health information. For his safety a planned outdoor event in nearby Munster was moved indoors. The German government are trying to avoid a second lockdown despite a rise in infections. “With the knowledge we have today, I can tell you we won’t need to close hairdressers and shops again”, Spahns said. “That won’t happen again. We won’t need working bans in care homes again.”

A vocal minority of people in Germany are becoming increasingly aggressive in their opposition to safety rules aimed at stopping the spread of covid-19. Recently the minister criticised those who “stay inside their Facebook and WhatsApp world, get ever more aggressive and no longer seek contact to those with a different opinion”. Despite the abuse, the approval rating for the measures that Germany has undertaken remain high with a recent poll by ZDF suggesting only 10% of respondents said they believed the coronavirus restrictions to be excessive, while 60% thought they were exactly right and 28% said they were not strict enough.