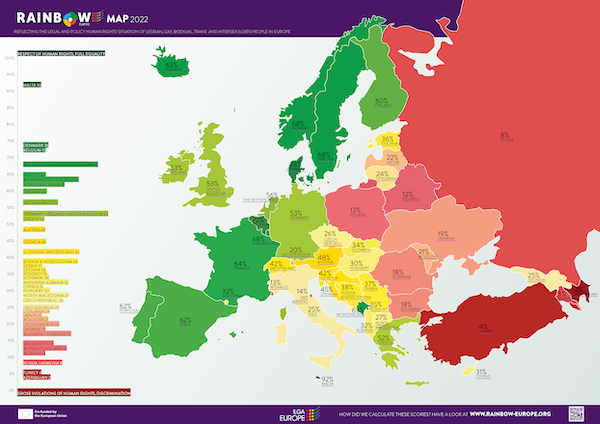 The UK has dropped from 10th to 14th place in Rainbow Europe – ILGA Europe’s annual benchmarking tool – which comprises the Rainbow Map and Index and national recommendations. ILGA Europe has produced the map and index since 2009, using it to illustrate the legal and policy situation of LGBTQ+ people in Europe.

According to ILGA Europe, the UK has suffered a significant drop in ranking because the Government is not effectively protecting on the grounds of sexual orientation and gender identity.

This comes at a time of widespread political and media anti-trans sentiment, while the British government is not moving on long-promised reforms on gender recognition and banning so-called ‘conversion therapy’ for all.

Malta topped the list for being respectful and working to afford equal rights for all, with Denmark and Belgium coming in second and third respectively.

Responding to the news, Lydia Parker, Amnesty International UK’s Women’s Rights Director, said: “Today’s publication of the annual ILGA Europe Rainbow Map and Index is a depressing – but sadly unsurprising – indictment of the current treatment of trans and non-binary rights in the UK. To see the UK’s ranking drop so significantly is a stark reminder of the lack of equal protections afforded to this group.