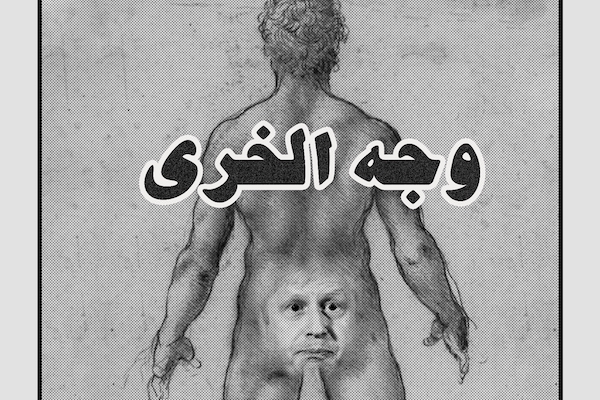 Walking through Brighton’s North Laine, if you look into one of the windows of the new LGBTQ+ Ledward Centre on Jubilee Street you’ll be confronted with Boris Johnson’s face staring out from the bum of Leonardo de Vinci’s drawing of The Proportions of the Human Body According to Vitruvius.

The poster is an enlarged version of Alqumit Alhamad’s controversial Boris x Da Vinci, a digital illustration of the prime minister with the Arabic word AssFace. Alqumit, a gay Syrian artist and refugee, created the work as a response to Johnson calling gay people ‘bum boys’ as well as his calling Hijab-wearing women ‘letterboxes’.

This piece is featured alongside other political and activist artworks in the exhibition ‘News from Nowhere’, produced by Brighton’s Socially Engaged Art Salon (SEAS), which features more than 20 local and international artists who explore political and social issues around migration, displacement and the politics of visibility.

Highlights of News from Nowhere include infographics from SOGICA, a research project funded by the European Research Council and based at the University of Sussex, exploring the difficulties of LGBTQ+ individuals who suffer persecution to seek asylum in Europe. On a similar subject, the photographer Robin Hammond exhibits Where Love Is Illegal, which is now more than five years in the making. This photographic project tells the stories of LGBTQ+ people escaping persecution, abuse and torture.

The exhibition marks the 70th Anniversary of 1951 Refugee Convention that is celebrated across the world in the last week of July. For this occasion, SEAS will organise a tour to view the other part of the exhibition at SEAS’s Studio at the Black & Minorities Ethnic Community Partnership Centre (BMECP). There, visitors will be led one by one into the hard hitting and immersive ‘Message in a Bottle’ project  by Jane Lancashire and Gil Mualem-Doron that commemorates the lost lives of thousands of refugees who drown in the Mediterranean sea.

The project took two years to complete with the help of more than 200 participants from Brighton and Sussex. In addition the event will include the screening of the disturbing short film ‘Twinkle Twinkle Little Star’ by Gil Mualem-Doron, that highlights the death of refugee children while crossing the Mediterranean and the betrayal of the promise given to refugees in the UN 1951 Refugee Convention. The film has a trigger warning and will be shown at the BMECP in a separate room.

The event will take place from 11am-3pm on July 31 at BMECP and it is free. However, priority will be given to visitors who registered in advance. To book your place, CLICK HERE.

The exhibition is supported by Arts Council England, the Rainbow Trust, BMECP and Sanctuary on Sea.

Exhibition runs until July 31, 2021 in The Ledward Centre, BMECP and online HERE.