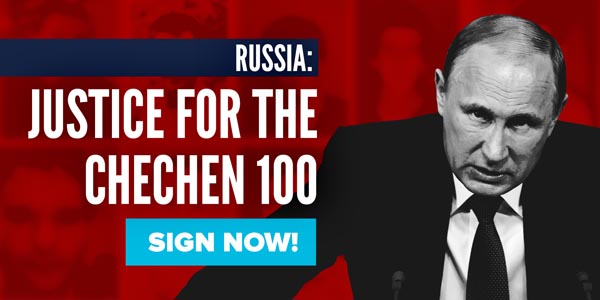 Gay men are being kidnapped and killed in Chechnya, Russia.

Last weekend the Guardian reported that more than 100 men in Chechnya had been arrested under suspicion of being gay.

The New York Times reported of people being tortured, beaten, and forced to share information about other gay men in the region. At least three men have been murdered.

The official response from the Chechen authorities is that “LGBT+ people do not even exist in Chechnya.”

Chechnya is a Republic within Russia’s borders, but often operates under its own rulings. Openly identifying as lesbian, gay, bisexual, or transgender is practically unheard of, due to the deadly stigmas.

Sources are reporting that the gay men who weren’t murdered have been released to their families for “honour killings.”

This could be the biggest coordinated governmental attack on LGBT+ people in recent history, but it’s not getting the media coverage it deserves. Partners on the ground are evacuating those still at risk, and they say the best thing we can all do is get the word out and demand an investigation.

The crimes these men have faced need to be heard. If we all speak out, we can help put global pressure on Russia to investigate it. But we have to act quickly.

All Out the campaigning website have organised a petition calling for an investigation and justice for all these people.

If you or someone you know in Chechnya is in need of urgent support, click here: to contact the Russian LGBT+ Network by email.