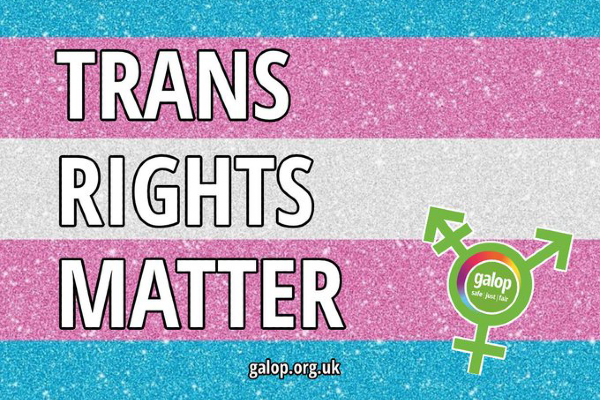 Galop, the UK’s LGBTQ+ anti-violence charity, has responded to Government plans to scrap reforms of the Gender Recognition Act (GRA), which would have enabled trans people to change their birth certificate without a medical diagnosis. The response is:

‘The Government’s alleged plans outlined in a recent Sunday Times article to abandon planned reform of laws protecting trans people and to actively legislate against trans women are deeply concerning to us.

‘All women deserve safety and dignity, whether they are trans or cisgender and whatever their sexuality. Women-only services are specialist spaces for and by women, with an increasing number having a positive history of working with trans women. Galop supports safe and inclusive services for all women.

‘Galop’s daily experience of supporting LGBTQ+ people facing violence and abuse leads us to be deeply apprehensive about the impact of these plans on our clients.

‘Trans women, and particularly black trans women, can face extremely high levels of violence and we are keen that government action should not excuse or legitimise the climate of hostility growing toward trans people in the UK.

‘Trans people are at particularly high risk of experiencing domestic abuse and sexual violence; with access to specialist services being essential to their safety and recovery.

‘Transphobic hate crime has also been rising year on year, with reports showing trans women to be at particular risk. The most recent set of Government data showed a concerning 25% increase in hate crime towards trans people, which was disproportionate to the overall 10% rise in hate crime. We foresee that these plans will lead to a greater increase in hate toward trans people by further legitimising the false belief that trans women pose a threat.

‘That these plans have been reported during Pride month and the growth of the Black Lives Matter movement shows disregard for the fact that black, Asian, minority ethnic and refugee trans people, particularly black trans women, already experience shockingly high levels of violence.

‘We are concerned that these plans, if true, will not only negatively impact on trans women who experience violence or abuse, but also gender non-conforming cisgender women’s access to services and public toilets. There is no safe and dignified way to police the anatomy of someone accessing a service.

‘Galop welcomes the reported plan to ban gay ‘cures’, however the absence of an equivalent ban on trans ‘cures’ is unacceptable.  There is robust evidence that so-called ‘conversion therapy’ is actively harmful, whether it is targeted at sexuality or gender identity. There is no reason trans people should be left out of protections against this abusive practice.’