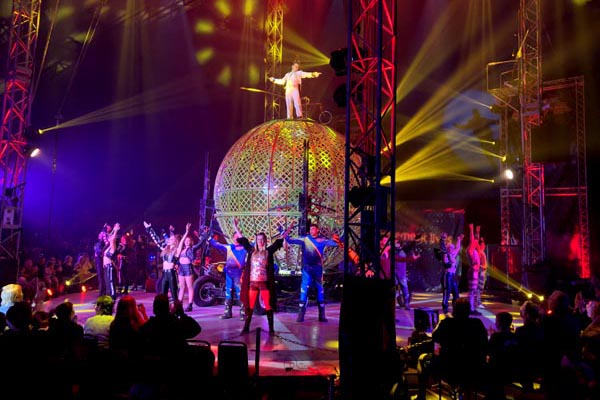 There is nothing quite like it at any of the Festivals in Brighton this year.

FIVE years in the making, Circus Extreme merges traditional and contemporary entertainment styles with extreme stunts and classical, traditional clown antics to deliver epic heart stopping moments and some of the most exciting daredevil stunts I have seen in a circus bigtop anywhere in the world.

Most of the artists work without any form of safety wires or nets which really adds to the drama of it all and had everyone around me squealing with delight.

With something for all ages to enjoy, special mention goes to the stunning Danguir Troupe for their breathtaking high wire routine and double wheel of death stunt. This was traditional old school circus at its very best and took me back to my youth in Liverpool in the 60s, when every year we went to the wonderful Bertram Mill Circus starring Coco the Clown.

However, without doubt the stars of this epic spectacle are the EXTREME® FMX team who perform in the Globe of Death where three motorbike riders endure G-force pressures on their bodies while executing a dangerous routine including vertical and horizontal loops within the encased mesh globe.

Their finale which closes the show sees the bike riders flying through the air performing mid-air backflips on their motorcycles as they fly over the circus ring and the mesh globe. It is visually stunning and had the audience on their feet screaming the riders on.

Henry the Prince of Clowns, a legendary traditional figure in the circus world, keeps the audience onside all evening concentrating his attention on the daddies in the audience rather than the kids. It all worked rather well.

This show is a masterpiece of theatrical production. Traditional circus routines merge with modern daredevil acts to create a professional theatrical spectacle performed to a genius musical score that build the tension all evening to the eventual climax when the motorbikes fly over the audience.

Find the time to check this spectacle out.