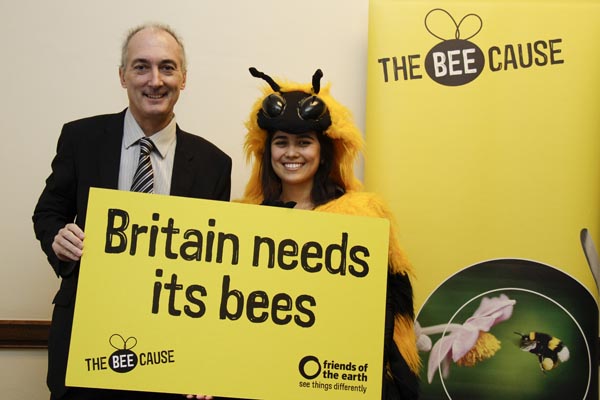 Mike Weatherley, the Conservative MP for Hove and Portslade, met a giant bumble bee in Parliament as part of a campaign by environmental charity, Friends of the Earth.

As well as meeting with furry representatives from Friends of the Earth, Mike recently signed the Early Day Motion 312 (Pesticide Use and Bumble Bees) which highlights the plight facing bumble bees when exposed to imidacloprid, a neonicotinoid pesticide.

Mike has met with a number of local beekeepers in Hove and discussed the serious threat against bees in Britain.

Last year, Friends of the Earth launched its Bee Cause campaign, which has been backed by more than 80,000 people and calls for the Government to urgently to introduce a National Bee Action Plan aimed at saving Britain’s bees.

“I am extremely concerned about the rapid decline of British Bees. They are not only an iconic part of our countryside, but play a vital role in pollinating our crops and flowers too. It is great news that Friends of the Earth is creating a buzz about these crucially important insects – I’ll be doing all that I can to help protect our bees in 2013.”