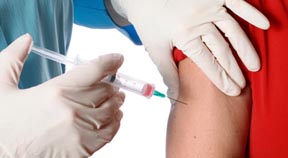 Residents aged 65 and over as well as frontline health and social care staff are being offered a free flu vaccine to avoid catching and spreading the potentially fatal disease.

MORE than 11,000 Brighton and Hove residents aged 65 and over risk catching seasonal flu this winter if vaccination rates match those of last year.  Over the flu season last year at least 13 residents were admitted into intensive care in the city’s hospitals with the highly infectious disease which compares to 904 nationally.

No-one died locally from flu although nationally there were 98 deaths.

For many the symptoms, which include fever, headache and aches and pains, can be quite mild but for some groups such as those aged 65 and over the disease can lead to hospitalisation, disability and even death.

Older residents are being urged to contact their GPs to take up the free jab because the best way to avoid catching and spreading flu is by having a vaccination before the flu season starts.

Most people that have the vaccine will not get flu and the side effects are generally mild and can include slight temperature and aching muscles for a couple of days afterwards.

Brighton & Hove City Council director of public health Tom Scanlon, said: “Influenza can be a very serious illness and for some people such as those aged 65 and over it can lead to serious illness, hospitalisation and even death.

“The best way to avoid catching and spreading flu is by taking up the offer of a free jab before the flu season starts. This offer is for those most at risk of flu including those aged 65 and over as well as frontline health and care workers in contact with this age group.

“Flu is preventable and I would strongly advise those in target groups to contact your surgery to arrange for your free flu jab.”

Brighton and Hove GP Katie Stead, who is promoting the flu jab for the local Clinical Commissioning Group, said: “The flu jab is free for residents aged 65 and over and care workers so why not take advantage of it. The vaccination could prevent you from having a nasty illness, going into hospital and passing on a nasty illness to friends and family.

“It’s easy, only takes minutes and all GP surgeries provide it through either appointments or surgeries where you can just turn up. It’s a myth that the jab gives you flu and that the jab is not effective in preventing flu – it is effective.”

Harold Williams, aged 78, from Rottingdean, is a double leg amputee and has had two heart operations that make him particularly prone to serious problems if he caught the flu.

Harold said: “I have the flu jab every year now because I daren’t catch the flu. The worst thing that can happen to me after everything else is to get the flu. I avoid the flu like the plague.”

The groups of residents recommended to have the free flu vaccine include:

•       everyone under 65 years of age who has certain medical conditions, including children and babies over six    months of age

•         everyone living in a residential or nursing home