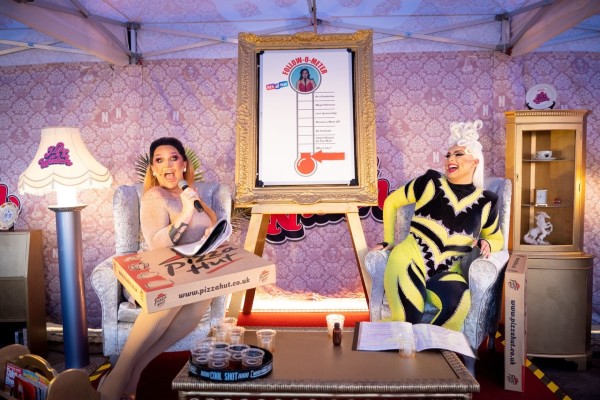 Drag superstars The Vivienne and Cheryl Hole have kicked off Netflix’s live I Like to Watch tour in Margate, as inspired by the performer’s video series for the popular streaming platform. The tour promises to be “fantastically camp”, and will now be travelling to LGBTQ+ venues in Bournemouth, Nottingham, Glasgow and Swansea, before a final stop in Hull on October 20.

Each night of the tour will be hosted by a rotating cast of Drag Race icons including The Vivienne, Tia Kofi, Cheryl Hole and Tayce. These queens will also be joined by a selection of local, up-and-coming drag acts. Attendees can expect to get “close and personal” with the queens as they watch and critique films including Pitch Perfect and He’s All That in their own unique style.

The Vivienne says that she is “so excited” that the tour has now become a reality, adding: “We’ve all had a shocker over the last year or so, and queens and LGBTQ+ venues have really struggled. I’ve made a career working in bars all over the UK, so I know how vital they are to our community” The queens hope to help revive local drag scenes across the country while also giving “everybody a camp time”.

Although the tour is now sold out online, there is a small allocation of tickets for each event at the venue which will be made available once doors open. These will be issued on a first-come, first-served basis.