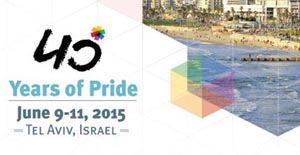 LGBTQ leaders from around the world are being invited to join their peers at the 40 Years of Pride conference in Tel Aviv from, June 9-11, 2015.

THE conference is organised by The Aguda, the National Israeli LGBT group which serves as a human rights organisation working to improve the lives of LGBT people, and A Wider Bridge, North America’s pro-Israel LGBTQ organisation.

The event aims to bring together a diverse group of LGBTQ leaders to inspire and strengthen each other, build skills and networks, and celebrate 40 years of LGBTQ progress in Israel.  It will culminate with Tel Aviv Pride, a celebration that attracts 150,000 people from across the world.

Many nations and communities will be represented, with an array of religious and secular practices, races, ethnicities, sexual orientations and gender identities.

Arthur Slepian, Executive Director of A Wider Bridge, says: “A Wider Bridge and The Aguda are LGBTQ organizations that each see that part of our respective missions is to be an active player in the global LGBTQ struggle for equality. This conference is a vehicle to move that struggle forward in a positive way. We hope this conference leads to a framework for greater global collaboration. We are holding this conference in Israel because we believe the Israeli LGBTQ community has something important to add to the global conversation about LGBTQ rights.”

Topics on the agenda include:

·       LGBTQ legal activism across the globe

·       the struggle for transgender rights and economic empowerment

·       making our communities and schools a better place for LGBTQ teens

·       the challenges faced by minorities within a country’s LGBTQ community

·       what can we learn from the United States’ success with marriage equality?

Christophe Girard, Mayor of the Fourth Arrondissement of Paris, will be the opening keynote speaker, and Ed Murray, Mayor of Seattle, will deliver the closing keynote address.

Delegates will have the opportunity to travel to the historic city of Jerusalem to tour the Old City, visit Yad Vashem (the Holocaust memorial & museum), and meet with key Israeli policy makers and community leaders in the Knesset (the Israeli Parliament). There will also be a celebration featuring leading Israeli musical and artistic performances.

The conference will culminate with the Tel Aviv Pride celebration, which this year has transgender rights and visibility as its theme.