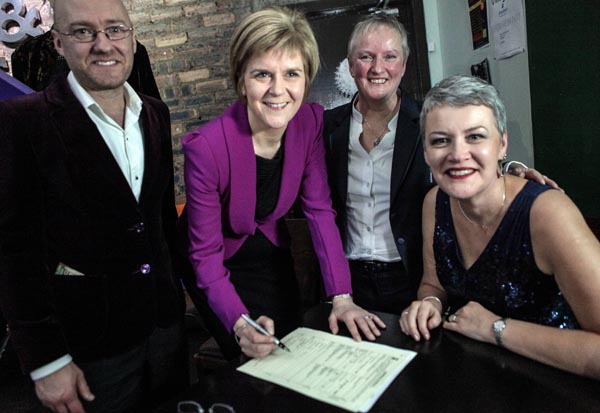 Top politicians among those in the Scottish LGBTI Awards’ shortlist.

The Awards are being organised by the Equality Network, Scotland’s national LGBTI equality and human rights charity, to recognise and celebrate the campaigners, politicians, journalists, public bodies, businesses, community groups and individuals that have made a contribution towards securing greater equality in the past year.

The inaugural event which will be hosted by one of Scotland’s best-loved comedians, openly-gay Karen Dunbar, comes on the 35th anniversary of the decriminalisation of homosexuality in 1980, 20 years after Scotland’s first Pride March and 15 years after the furore over the repeal of Section 28 during the first term of the Scottish Parliament. It will also mark the first year of equal marriage in Scotland, after the country became the 17th in the world to pass same-sex marriage legislation in February last year.

The glittering red-carpet awards ceremony will be attended by 350 LGBTI people and equality supporters from across Scotland, including leading politicians, businesses and celebrities as well as dedicated activists.

Well-known LGBTI equality supporters including Pop Idol winner Michelle McManus, lesbian singer-songwriter Horse McDonald, and West of Scotland celebrities Robert and May Miller will be among acts providing entertainment on the night.

The Equality Network, who launched a major new report earlier this week revealing that LGBTI people still face widespread prejudice and discrimination in Scotland, say that they hope the event will provide an opportunity to recognise the significant advances made in recent years, while also encouraging further efforts for equality in the future.

To read a copy of the report, click here:

Among the most competitive of the categories will be the prestigious ‘Politician of the Year’ award whose nominees include First Minister Nicola Sturgeon, Conservative Party leader Ruth Davidson, Green Party leader Patrick Harvie, Lib Dem leader Willie Rennie, Labour’s Margaret McCulloch, and the SNP’s Alex Neil, who led on Scotland’s same-sex marriage legislation.

Queen of daytime TV, Lorraine Kelly, is nominated for the ‘Journalist of the Year’ award in recognition of her efforts to raise awareness of transgender equality through several high-profile interviews with trans activists, and because of her longstanding support for LGBTI equality, including during the equal marriage campaign in Scotland. Speaking this week Lorraine Kelly said she was “very honoured and delighted to be shortlisted for such a prestigious award”. She will be up against former Scotland on Sunday Deputy Editor Kenny Farquharson, a long-standing ally of LGBTI equality, STV’s openly-gay reporter Alan Jenkins, and Katherine O’Donnell, the openly-transgender Night Editor of The Times, among others.

STV News, BBC Reporting Scotland, and charity sector newspaper Third Force News are up for the ‘Media Outlet of the Year’ award alongside LGBTI-specific outlets Kaleidoscot, Scotsgay, and Gaia Magazine.

Public bodies including the Scottish Prison Service, NHS Greater Glasgow and Clyde, the Judicial Institute of Scotland, and the Scottish Government’s One Scotland campaign are among those shortlisted for the ‘Public Body Initiative of the Year’, for their efforts promoting equality. While major organisations including Barclays, RBS, and the Gay Police Association are among those shortlisted for ‘Staff Network of the Year’ for their work advancing equality in the workplace.

The shortlist for ‘Event of the Year’ will include the Commonwealth Games, whose televised opening ceremony saw openly gay actor John Barrowman kiss a male dancer in what was widely seen as sending a message to the 41 Commonwealth countries that still criminalise homosexuality. The Games will compete for the award alongside Scotland’s two main gay pride events, Pride Glasgow and Pride Edinburgh, and the milestone event that was the passage of Scotland’s same-sex marriage legislation.

The ‘Student Group of the Year’ award shortlist includes three of Scotland’s ancient universities, Glasgow, Edinburgh and St. Andrews, among others, while nominees for the Culture Award will include Scotland’s only LGBTI arts festival, Glasgay!, the LGBTI history project Our Story Scotland, and the respected openly transgender playwright Jo Clifford, who will perform her acclaimed play ‘The Gospel According to Jesus Queen of Heaven’ at this summer’s Edinburgh Fringe Festival.

Recognition will also be given to youth groups, sports groups, venues, community groups, charities, volunteers and dedicated LGBTI campaigners from across the country, from Shetland to Ayr.

Two special awards, chosen by the Equality Network, will also be presented on the night, including a ‘Lifetime Achievement’ award and a ‘Friend for Life’ award which will recognise some of those activists and supporters that have made a particularly significant contribution towards LGBTI equality in Scotland.

The event is being sponsored by UNISON Scotland and Humanist Society Scotland. It will include a celebratory champagne reception, a three-course dinner, entertainment, and a fundraising auction. All money raised will go towards the Equality Network’s campaigns for LGBTI equality.

Scott Cuthbertson, Development Coordinator for the Equality Network, said: “This has been an historic year for equality in Scotland and the Scottish LGBTI Awards will provide an opportunity to recognise and celebrate the important advances we have made, and the inspiring work of those that make a positive difference to the lives of LGBTI people. We know that there is still much more to do before LGBTI people will have full equality in their day-to-day lives so we hope that the recognition these awards provide will encourage further progress in the future.”

Karen Dunbar, who will host the awards, added: “I’m chuffed to bits and really looking forward to hosting the first ever Equality Network Scottish LGBTI Awards. It’s vital that we celebrate the people who have made a difference to the lives of LGBTI people here in Scotland, and great that the event will support the work of the Equality Network, Scotland’s National LGBTI Equality Charity!”

Politician of the Year

Journalist of the Year

Media Outlet of the Year

Event of the Year

The legalisation of same-sex marriage

Public Body Initiative of the Year

Staff Network of the Year

Student Group of the Year

Equality Initiative of the Year

Community Group of the Year

Youth Group of the Year

Venue of the Year