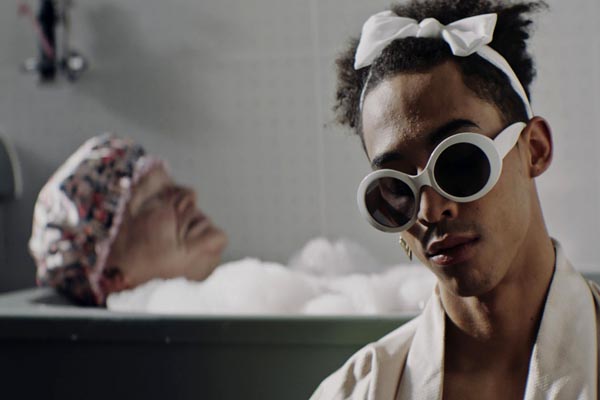 Brian Butler reviews the heart-warming film about a dying drag queen, set and filmed in Brighton.

JACK Collins is an 80-something straight man enjoying every minute of his career as drag queen Jacky in Brighton.

In Tucked we first see him singing I Will Survive and working his magic on an audience with innuendoes, suggestive offers and great repartee: “I’m not fat” he tells us – “just easier to see”.

We love his raddled old face and over-the-top make-up. But as he arrives home after his late night show, he collapses. Cut to the doctor’s surgery where he learns he has an untreatable aggressive cancer and has 6 weeks to live.

When he collapses later on stage, the doctor’s message is clear – he should retire. But typically stoic Jacky says: “If I’m dying and nothing can be done why should I give up doing what I like doing . I’m going to enjoy these last few weeks before leaving this shitty planet.”

And so reluctantly he ends up showing the ropes to an ingenue young dragster. Faith, who loudly proclaims “I’m not a guy and I’m not a girl. I’m an individual. I’m Faith”.

And unlikely as it seems, there is real chemistry between the two at opposite ends of their lives and careers.

Reduced to sleeping in his car, Faith is taken in by Jacky to share his last few weeks in a strictly platonic arrangement.

Veteran TV and film actor Derren Nesbitt is brilliantly cast as Jacky, and Jamie Patterson who writes and directs is uncompromising in his many close-ups of Jacky’s face – giving Nesbitt every opportunity to reveal his true sadness and regret by the most subtle of facial movements.

Brighton-born hip-hop star Jordan Stephens is wonderfully endearing as the youngster trying to make his way in his non-binary cocoon. When the two are beaten up in a dark alley, the bond is secured.

And so the two embark around Brighton fulfilling Jack’s terminal bucket-list, with sweet comedic moments in a strip club and with drug dealers.

There’s a tragic back story too for both men. Faith has been thrown out by his father for his sexuality; Jacky is estranged from his daughter – played by April Pearson – because he failed to go to his wife’s funeral – at his wife’s request.

Perhaps the most touching scene is a monologue at his wife’s graveside, which Nesbitt gives with pathos, humanity and angst.

There is no doubt how the story will end and in the final scene we see in Faith’s new drag act that Jacky’s memory will live on.

Tucked is being screened for one performance at Duke of York’s Picture House, Brighton on May 13 at 6.30pm, followed by a question and answer session with the three lead actors, writer Jamie Patterson and producer Finn Bruce.

It’s  a witty, warm and generous film about love, life and loss, and not to be missed.