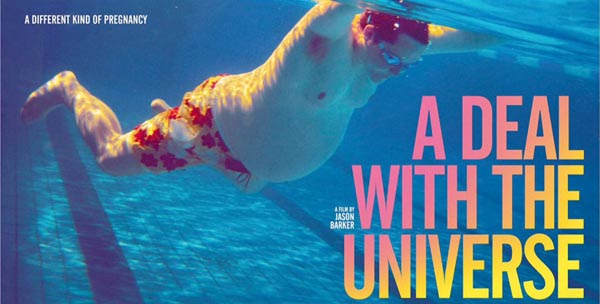 There’s no question that Tracey and Jason’s love is deep, humorous and heart-warming. In this 90 minute film with its home movie feel, we explore their relationship and the deep rooted desire they have to have a baby.

AS the film opens we see Tracey in the aftermath of a mastectomy following a diagnosis of cancer. The drugs she needs to take kill the couple’s Plan A – that she should conceive. Plan B is far more complicated and fraught with impediments.

Jason began life as a woman and after great reduction surgery, took a course of testosterone.But as the story develops so does his complex and equivocal feeling about gender.

So he decides, although now classified as a man, that he will carry the baby. So begins a long and heart-breaking period of time when the couple try and try and try again, through  IVF and sperm donation to have the child they so desperately want.

Shot on a small camera with the couple often talking directly to us, the variable quality of picture and sound doesn’t detract from the story – indeed it makes us feel we are in their flat or caravan and they are talking to us alone.

In his stand-up club act Jason seems to find comic relief from the frustrations and contradictions his life seems to exemplify. The comedy is obviously very cathartic for Jason. When he puts mascara on the tiny bit of facial hair he possesses, he tells us “I don’t look like a man, I look like a comedy pirate.”

Jason’s story has been well documented in the media – notably The Guardian – so it’s no great spoiler to reveal that the pregnancy eventually happens. One of the most poignant scenes is during the last few hours of the pregnancy when Jason, tired, depressed and mournful finally seems to have tired of talking to the camera.

And the happy outcome is summed up by the song over the final credits “Do whatever the heck you want.”

This is a warts and all love story and the two protagonists are not ashamed of their naked bodies or the medical procedures they endure.

But ultimately it’s a story of perseverance, determination, deep affection and a successful bid for happiness and fulfilment which is well worth a watch.

A Deal with the Universe, made by the BFI, Sharp House and Delaval Films is out now on dvd.