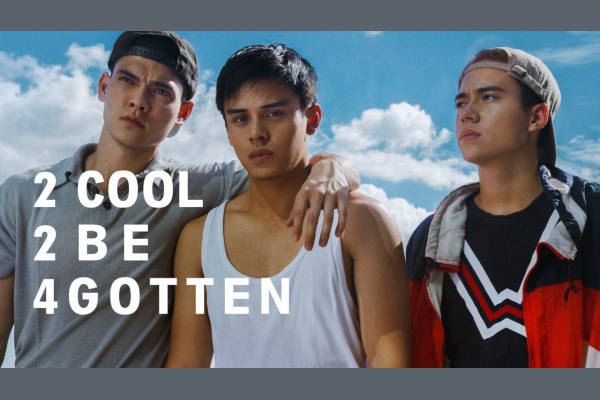 Felix Salonga is a bright teenage boy in a run-down Catholic school in the  Philippines in the late 1990’s.  He’s bright – he’s top of his class all the time and his comfidence borders on arrogance. He’s also Felix-no mates – that is until the enigmatic and mesmerising Snyder brothers are parachuted into town.

Half American half Philippino Magnus and Maxim take over Felix’s world – especially Magnus , tall, handsome and  attractive and soon to become the love of Felix’s life.

Unfortunately for Felix , played with tender warmth by Khalil Ramos, the romantic feelings are not requited, and thus starts not only a sad love story of teenage gay yearning but an explosive path that leads eventually to a double murder and even possibly a final suicide.

Directed by Peterson Vargas, it’s a strangely haunting piece about dark  desires  and unfulfilled ambitions laced with an even darker world of a rumoured decapitation  cult that is said to be rife at night.

It’s a heady cocktail Vargas presents to us and Felix’s dilemna is complicated further when his sexual advances to Magnus, played delicately by Ethan Salvador are then turned to his brother, the much more unpleasant Maxim ( Jameson Blake).

The film is heavy with symbolism – the absent fathers, the home drowned by a tsunami, the vicious school regime, the taunting laughing girls, the denial of gayness and the violence just lying beneath the surface of this impoverished  fragile community.

That we don’t get a happy ending or even a satisfactory one, doesn’t detract from the beauty of the photography and the universality of the central theme.

The film is distributed by New Queer Visions media – full details of how to watch at nqvmedia.com