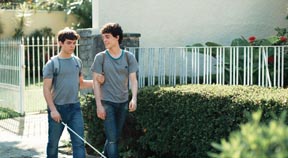 Hot off the heels of its UK premiere at the BFI London Film Festival, the Duke’s at Komedia are screening this Brazilian coming-of-age drama.

EYES WIDE OPEN present the award winning movie, The way he looks followed by a question and answer session with the director Daniel Ribeiro on Wednesday, October 15 at the Duke’s At Komedia.

Blind teenager Leonardo is on the brink of his first love. Will it be his best friend Giovana, or confident new boy Gabriel?

The film won the Teddy Award for best LGBT feature at the 2014 Berlin International Film Festival.