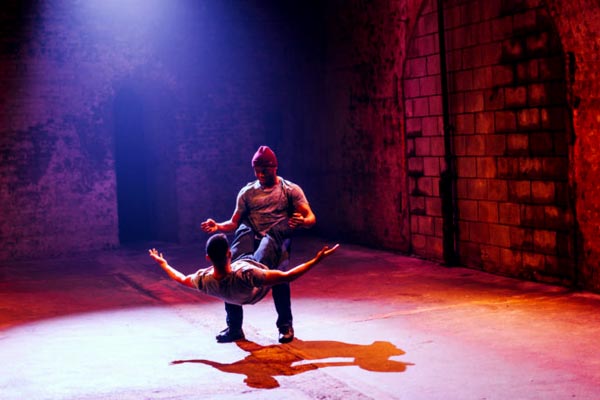 Presenting physical theatre at its very best, BAME company The Pappy Show use playing games and physical training as the basis for an hour of music, dance , acrobatics and dialogue exploring what it is to be male.

FOCUSSING on the child within, this highly agile and talented company of nine, directed by performer Kane Husbands lead us through the complex maze that growing from boyhood to manhood can create.

From its opening choreographed dance with balloons, stage fight, and fatal stabbing, the company pose questions to one another to tease out the conflicts within and then play them out in intricate balletic sequences, some of which are just visually stunning.

They take us through a series of statements, which may or may not be true, but which are always entertaining and thought-provoking, about race, gender, beliefs and ancestry.

Their main game is called Map of The World – where they emphasise their own geographical and historical backgrounds. The nature of their rehearsal and performance techniques is fascinating. What seems totally improvised is obviously not so, as it involves such intricate patterns of movement.

But it’s entirely believable that their words are their own and come from their hearts and minds.

Most moving for me was a short section where a father writes a letter of advice to his son, “Let your good be better and your better be best” and the son replies, with the telling line “you need to let me be my own man. I’m no longer a boy”.

At one point a particularly disturbed young man acts out his inner demons which are causing him to hate himself, but in the end the group show their brotherhood, immense friendship and sense of fun.

It’s  a joy to have experienced.

Boys played at the Old Market on May 25 and 26 as part of the Brighton Festival.

The company perform shows around the UK and run workshops based at the National Youth Theatre in London. Seek them out .