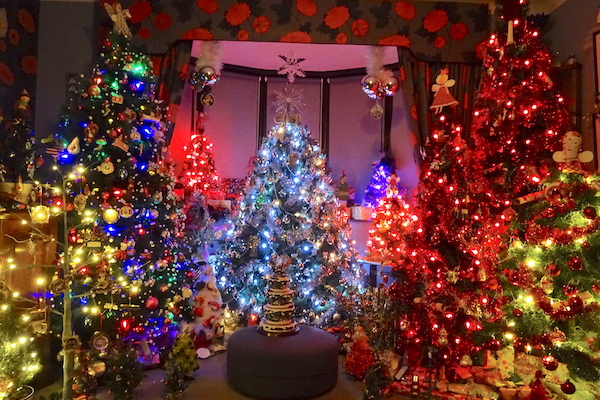 On Saturday, November 28, Seaford resident and well-known local gardener, Geoff Stonebanks, will reveal his other grand passion, Christmas decorations, in a brand-new Channel 5 TV programme, Incredible Christmas Trees and How to Decorate Them, which is a festive run-down of all things Christmas tree and a showcase of them from around the world.

Geoff has been interested in Christmas decorations since his early childhood, when his parents had a country pub in Oxfordshire. As a young boy, he used to help his mother decorate the two public bars and their private accommodation but soon ended up taking over! He then went on to decorate the pub, The Dolphin, right up to 1987, when his parents retired, continuing to purchase new ones for his own home.

The production team from Athena Films, who made the programme for Channel 5, had been researching possible scenarios and had contacted Geoff through his social media. Nikkita and Ollie from the production company, within Covid secure restrictions, spent half a day at Geoff’s home last week, filming part of his amazing collection, gathered over the last 60 years. Normally, he would not have put his decorations up until 1st December, but with a broadcast deadline looming, the producers needed to ask if he would decorate just one room, ahead of time, to facilitate filming. So, Geoff spent four days to get the required baubles, trees and lights out of the loft and set up in readiness for shooting.

The tree in Geoff’s living room alone has 15 metres of tinsel, 1700 fairy lights, over 800 baubles and 10 metres of silver beading!  Geoff tells us “I always feel, when getting my garden ready to open every year, that I am dressing a film set for visitors to view and the same principle applies with my Christmas decorations. I’m a bit of a perfectionist! The artificial tree takes ages to set up with all the branches having to be just right. Once assembled, there are three strings of lights, one goes top to bottom, up and down the tree, one spirals around bottom to top in one direction and the final one spirals up in the opposite direction. Flashing sequences of the three sets are then adjusted to give the perfect look! Next, tinsel and silver beads are carefully positioned to create evenly balanced swirls all the way up the tree followed by the baubles and other decorations.

His eclectic mix includes some delicate pieces from 1930s Prague, many glass baubles from the 1950s and 60s and a wealth of decorations from Woolworths from 1960 until its demise. Following a spell of six successive Christmas breaks with friends in Washington DC back in the late 1990s, he began a collection of the official White House Christmas decorations, issued by the White House Historical Association. They are beautifully crafted pieces in memory of past presidents, each beautifully packed in decorative boxes and a detailed history of the president immortalised.

Geoff tells us “It is no mean feat to get this collection down out of the loft and set up every year, even more so to pack it all up again after Christmas and put it back in the loft! By New Year’s Day, even I’ve had enough!”

Athena Films made a payment to Geoff for his work, which has been donated to Macmillan Cancer Support.

See the programme at 6.35pm on Channel 5 on Saturday, November 28 and read more of Geoff’s Christmas, present and past, by clicking here. If you miss the programme, you can catch up on My5.