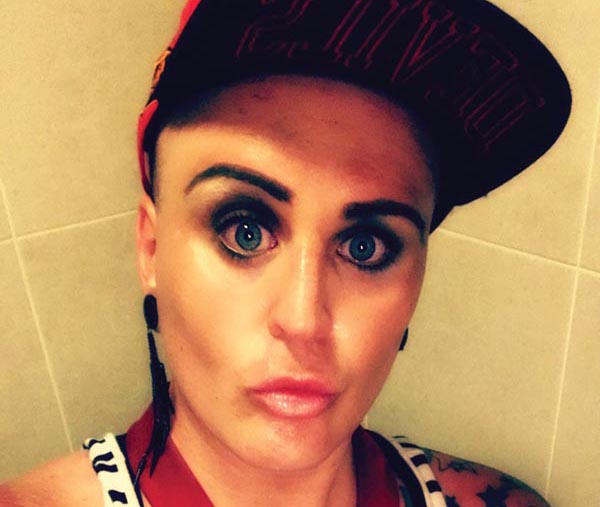 Last month I wrote about my Pride experiences over the last 20 years and how I never quite felt like I fitted in. I was always troubled with poor trans representation. I surmised by hoping that trans folk, and the less represented minorities of the LGBTQIA+ umbrella, would be better respected and represented at these events. Brighton Pride 2017 confirmed my worst fears about the current state of the Pride celebration.

On the Friday before Pride I cancelled my place in the march with a mental health group whose podcasts I’ve been a guest on. I sent messages to my closest friends telling them I probably wouldn’t attend, and spent the day in panic and upset. I was scared. Scared that I’d be ridiculed as a trans woman by the most heavily represented demographic at Pride, scared that I’d be read as a drag queen, scared that people would assume that I was a cis gay male ‘dressed up’ for Pride. Most worryingly I was scared that I’d be subjected to some form of violence or abuse. The mental health group were lovely to me and understood that my safety came first, and many a friend reassured me that I was going to be in a safe space where I would be surrounded by people who would look after me should I find myself in a difficult situation. I really felt it was important for me to be there. I can’t moan about lack of trans representation and then not turn up. It was important for me to be seen, but I was petrified of going.

I contacted the ex LGBT liaison officer for the local police (in my capacity as a friend) and they too reassured me that I would be safe, and if I were to come to any harm there would be enough people on duty to safeguard me. After a long chat with one of my dearest friends, a cis gay male who I’d be spending the day with, a friend who has often had to jump in and protect me from transphobia, I agreed that I would attend. He is, after all, one of only three people who I feel safe walking the streets with at night. I know that he will defend me and protect me should needs be. Unfortunately all my preparation was to prove fruitless and I was to be subjected to some unpleasant experiences at the easier end of the spectrum, and sexual assault at the other.

The morning of the parade arrived and we went for a beautiful breakfast in a brasserie full of people excited for the day. We got chatting to the people on the tables either side of us and I could feel the community spirit. My anxiety and worries began to wash away. We headed down to the bottom of the Old Steine where we waited around an hour for the parade/march to come (I never know what to call it these days). In that time we spoke to the people surrounding us and the community spirit I felt in the brasserie earlier was heightened. I bonded with a beautiful cis lesbian who had come down from London, and after revealing her sexual attraction towards me she took my phone number. My fears, my anxieties, my worries over safety and acceptance had all been washed away. I was filled with love and community spirit. My preconceptions were gone, and I was looking forward to the weekend.

The parade/march came past and I cheered on every single one of my friends and acquaintances who were there showing up for whichever charity or community group is close to their heart. I was bursting with pride as I saw the mental health group with whom I was supposed to march, Terrence Higgins Trust, who I’ve marched with for many years after working for them, and the trans groups, specially those championing trans youth. To say I was proud is an understatement. Let’s not discuss my feelings over the Co-op and Tesco entries.

As is tradition, once the march/parade passed we followed it to Preston Park en masse. I met a tall cis gay man wearing a 6ft Trans Pride flag as a cape. We got chatting and he told me that loads of people asked him if he was trans, but he simply said ‘No, I’m cis, I’m just showing up for trans people. We hugged and I thanked him for wearing it, and he thanked me for letting him. As we drew close to Preston Park, things began to change for me. The atmosphere was slightly different and didn’t feel so safe and welcoming. Making my way up the side of the park to the entrance someone pulled down aggressively on the hem of my dress and told me I was showing off too much leg. Before I had the chance to pull her up on this she ran ahead giggling, wearing a denim skirt as short as my dress. What made her feel entitled to call me out? Why, in a sea of men, many of whom were wearing clothing that revealed naked buttocks, was I chastised for showing my legs? Legs that were shown proportionally the same as the cis girl who felt it okay to touch me without consent? I felt guarded once more, like I did on Friday evening and the feelings of love and community that I had at the march/parade were rapidly fading. A guy came up to me with his phone and told me, “I’ve been following your arse all the way here,” and showed me close-up photos of my bum on his phone. In the queue to get into the park I got chatting to a cis lesbian couple and after a few minutes it was clear that one of them thought I was in drag. Her girlfriend corrected her, but by the time I entered the park I wanted to leave.

I made my way to the Cabaret Tent to see my dear friend, Spice, perform, and in that tent I felt safe. Fans of drag realise that I’m a woman and not a drag queen. I don’t resemble a drag queen in any way, I look like a woman, and those that know their drag can see this. I felt safe here so remained for a few hours.

“I can’t moan about lack of trans representation and then not turn up.”

As we made our way to the Trans Tent I realised attitudes towards me in the main open spaces of the park were not all positive ones. If my cis gay male friend walked hand in hand with me or by my side I was left alone, but if he walked a few paces in front of me and it wasn’t obvious that we were together then I received abuse. In the Trans Tent I found solace with my trans family and hung out there until they packed up. I was surprised with how small the Trans Tent was, and disheartened that it was in a quiet area of the park, tucked out-of-the-way. Quite invisible in comparison to the other tents. Given that trans people started the Pride movement, I’d like to have seen a larger Trans Tent, as would, I’m sure, the wonderful ally that I’d met wearing his trans flag with pride. I hope that next year the Trans Tent is on a par with the other tents, in a more visible area that has foot traffic.

Making our way over to the Main Stage to watch the two headline acts was nerve-wracking given my experiences of the day so far. We found a spot against a railing where no one could approach me from behind. I had one friend with his arm around my waist permanently, and my arm around his shoulder. This acts to stop instances of transphobia and assault as I’m seen to be ‘with’ someone, just as on my walks through the park. My other friend stood directly in front of me, dancing away, enjoying himself, but fully aware of how scared I was. Manoeuvring himself between me and anyone who walked past so they had to brush past him rather than me. As vulnerable as I felt amongst such a large group of people I felt somewhat safe knowing these guys had my back.

Over the two hours that I was there I exchanged pleasantries and cigarette lighters with the guys next to me and felt safe. I didn’t feel at risk and once again started to feel the love. I started dancing and within five minutes of letting go so tightly of my friend and inching myself away from the railings that I was glued to, to protect my bum, I was sexually assaulted. A man walked straight up to me and touched my genitals. My reflexes kicked in and I pushed him off me into my new-found lighter buddies, who, having witnessed the whole thing, moved him away from me very quickly. They made it clear to him what he had done was sexual assault.

I suddenly felt extremely vulnerable again and as hard as I tried I was unable to relax and enjoy the rest of the gig. I felt dirty and violated. I left Preston Park and walked back to town, sandwiched between my friends for security. I made it as far as the Marlborough Street Party, the place where I had planned on spending my post-Park evening. But even there, in the pub where I feel the safest, the original home of the Museum of Transology, the place where Trans Pride is centred around, I was unable to even enter the cordoned off party area. My Pride was over. I needed the safety of my home, and I was unable to leave my flat on the Sunday to partake in the Village Street Party.

I was contacted on Monday by the former police LGBT liaison officer who asked if I had a good weekend and discussed my previous fears. With a great deal of shame I explained what had happened to me. Their response was absolutely amazing. They first reassured me that it wasn’t my fault, I wasn’t asking for it, I didn’t deserve it, and they guided me through the reporting process. Making it as painless for me as possible.

It’s five days on from the events of Pride Saturday and I‘m not sure how to reconcile this. I’m going to London tomorrow to the National Theatre and plan to wear the same dress I wore to Pride to rid myself of the current shame I’m harbouring from having my dress hem pulled down and then later being sexually assaulted. What I’m struggling more to reconcile is why this happened to me this weekend, and I keep asking myself why do people think it’s okay to do these things to me and would they do them to a cis woman? Would one cis woman wearing a short skirt publicly, aggressively and physically shame another for wearing a hemline the same as theirs? I very much doubt it. Would a guy following a woman taking photos of her bum then show her them? Possibly, but these were sexualised photos taken without consent. Would a cis gay man try to touch the genitals of a cis woman without consent? Possibly in some instances, but I can’t help concluding that people think they can do this to me specifically because I’m trans and not cis. I feel that a large section of society doesn’t actually think trans women are women. We are NOT something to be ridiculed, objectified, or abused.