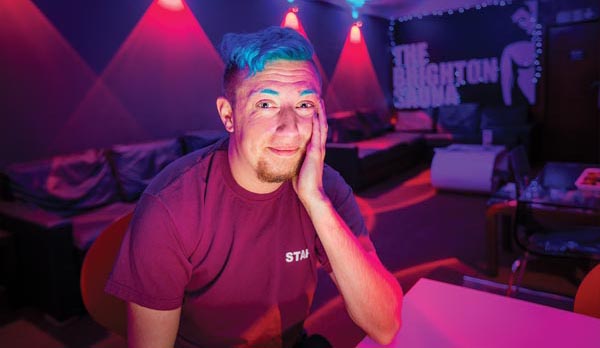 Jak tells Gscene what its like working as a trans guy in an all-male sauna.

“My name is Jak. I’ve worked on the scene at the Brighton Sauna for two and half years now and I love it. It’s varied, entertaining and ultimately I get to meet a lot of different people. They get to meet me too. You see, I’m a trans guy and as far as I know, the only openly trans guy who works in an all-male sauna in the country (I’d love to be wrong about that).

I came to the job the same way a lot of people find a job – I asked a friend, and now colleague, if there was anything going there. I had just moved back to the area and was sofa surfing so I needed an income quick. I was staying with him at the time, and had never really stepped foot onto the scene but was definitely intrigued by his job. I asked how to apply on the off-chance and he gave me Paul, the owners email. I had no idea what a sauna was but I thought working in an environment with other men would help with my gender dysphoria.

Past experience with gay men gave me the feeling going into it that I was going to have to educate, which made me all the more determined to get the job. The interview was just the start of that process really.

When I first sat down in the office with Paul, he asked me for all the usual ID and documents except all I had was my old ID and a deed poll. I didn’t know how or when to mention it until he asked if I had been married, hence the deed poll. I decided right then to just go for it and told him “I’m trans” and we tend to do that sort of thing.

I half expected the interview to end right there, I was so nervous. It’s hard to predict how someone will react when you out yourself as trans. He paused, looked at me, looked away and back again and then said; “Oh. Well I guess we’ll have to write some policy about that,” and then we just carried on. I can’t begin to tell you the relief I felt, like I’d passed some sort of test and by the end I was offered the job.

All of a sudden I was a sauna boy. I didn’t ‘pass’ very well at the beginning. Nearly every shift for the first six month or so I was misgendered or asked if it was weird being a girl/lesbian working in a sauna. An ironic question since I’ve never identified as a lesbian or been on the lesbian scene. At the same time I was trying very hard to learn the job and prove everyone wrong who thought I wouldn’t last in the job.

Very early on it was easier to just out myself and be openly trans. It didn’t stop all the misgendering but it did help to stop it faster. Of course this meant I now took on the role of educator. I ended up drawing from experiences in my previous job as a telephone fundraiser in order to help me communicate my story to people. It’s a very different line of work but the soft skills I learned, such as objection handling, mirroring and learning to read people fast so I could adapt my approach, all came in handy when talking to customers and colleagues.

Most people in my experience aren’t asking inappropriate questions out of malice but out of ignorance and I realised that it’s easier for people to connect to an idea if it’s standing right in front of them in person rather than reading about it on a screen. I’ll admit, it gets tiring sometimes especially if it’s a busy night and the towels are piling up but I consider it just as much a part of my job now as anything else I do at the sauna.

Fast forward two and a half years later and I think I’ve made my mark in my own small way. I’ve managed to reach a large audience of gay men and let them know that trans (and gay!) men exist and we’re just like any other guys. I’ve been able to talk to a lot of people about all kinds of issues surrounding trans men, non binary people and trans women. They’ve all got to know me as a person, one of the guys, and I’m not a curiosity or unknown quantity anymore.

Paul and my colleagues have all been great supporters, especially by giving me the means to make the scene more accessible to trans people by letting me start our new trans-exclusive night on the fourth Monday every month. We’re such a unique venue and the perfect place to host a safe and body positive space that’s free from harassment where no one has to explain themselves. Plus it allows people to use things like a jacuzzi or sauna, things they feel like they might not get to use otherwise.

All things considered, I’m lucky that I work in a place that’s supportive, affirming and taught me a lot about the kind of man I am. I’m not ashamed of what I am and I’m privileged enough not to have to hide it. I think most of my regulars have forgotten that I’m trans in truth and now I’m just the guy that’s there every weekend on the night-shift, looking after all my boys.”