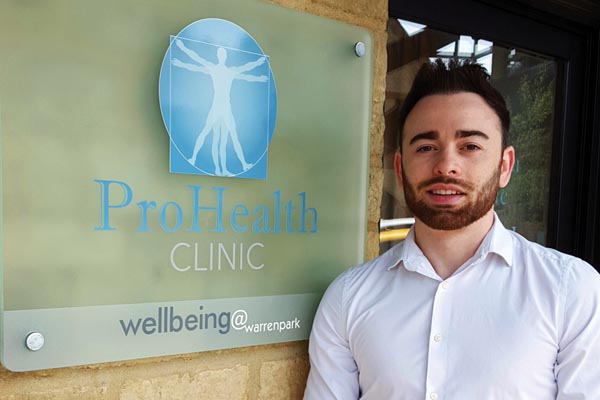 I was diagnosed with Fibromyalgia at the age of 23, having been struck suddenly by a long list of debilitating symptoms. By Oliver Eaton, ProHealth Clinic.

I EVENTUALLY managed to overcome it – but only after many hundreds of hours researching the root causes of the condition and how best to treat it without medication.

The NHS estimates that 2-4.5% of people in the UK may have fibromyalgia syndrome – estimating between 1.2 million and 2.8 million people. 75-90% of people with fibromyalgia syndrome are women. It’s a condition that conventional medicine currently has no answer for and sufferers are often prescribed with long lists of symptom-managing medication with often damaging side effects. There are many well-documented alternative treatments available that, unfortunately, doctors and consultants aren’t aware of as they aren’t part of their university curriculum.

What is Fibromyalgia?
Fibromyalgia is defined as a sensitisation of the central nervous system. This essentially is when the body is stuck in ‘fight or flight’ mode. According to the NHS’s website, the following symptoms can be associated with Fibromyalgia:

What causes Fibromyalgia?
As described earlier, Fibromyalgia is when the body becomes stuck in ‘fight or flight’ mode. For the body to become stuck it has to have been under chronic stress for a prolonged period of time. This stress can be either physical or emotional.

These common forms of stress have been linked to the development of Fibromyalgia:
♦ Prolonged virus – eg Glandular fever
♦ Prolonged emotional stress – work or domestic
♦ Chronic pain from a previous unresolved injury
♦ Misalignment – misalignments in the body can cause chronic stress on the muscles and nerves, subsequently causing pain
♦ Gut bacterial overgrowth – bacteria such as candida can overgrow in the gut and can cause many of the symptoms associated with Fibromyalgia, including: pain, insomnia, fatigue, IBS, food sensitivities

My own Fibromyalgia had been caused by candida in the gut. I found it hard to believe at first because I’d always thought candida was only an issue in people who had a bad diet and my diet was really good. This led me to learn about the many other things that can leave an individual’s gut vulnerable to a candida overgrowth; the main being antibiotics. Antibiotics kill not only the bad bacteria in our bodies but also the good bacteria. We rely on our good bacteria to defend ourselves from bacterial overgrowths such as candida. The problem is that doctors in the UK fail to advise patients to take a course of probiotics after their course of antibiotics to help repopulate our good bacteria.

There are many treatments available to help address the causes of Fibromyalgia. I will list some of them that have helped me, and that I now use successfully with my clients to help them overcome the condition:

Nutrition
There are many foods available that can help to reduce inflammation in the body including:,  green leafy vegetables, celery, beets, broccoli, blueberries, pineapple and coconut oil. Also, there have been many studies proving that a vegan diet can help to reduce the symptoms of Fibromyalgia. A vegan diet involves eliminating out of your diet anything that has come from an animal; mainly meat, dairy and eggs.

The University of Kuopio in Finland conducted a study to determine the effect that a vegan diet had on Fibromyalgia sufferers over a three-month period. The study concluded an overall reduction in pain and joint stiffness, alongside an improvement in sleep quality.

Cognitive therapy
The most effective cognitive therapy I found for myself was something called EFT (Emotional Freedom Technique), which is like an emotional form of acupuncture as it involves tapping on specific acupuncture points in the body whilst speaking certain sentences over and over to yourself.

Professor Gunilla Brattberg at Lund University in Sweden performed a study involving 86 women suffering from Fibromyalgia. They undertook an eight-week course of EFT which resulted in an overall reduction in symptoms
of the condition.

Supplementation
There are many supplements available to help with the symptoms of Fibromyalgia. I will list a few of them that can help with each of the main symptoms of the condition:
♦ Energy levels – ginseng, maca
♦ Sleep – melatonin or cherry juice (contains a natural form of melatonin)
♦ Pain – curcumin, ginger
♦ Candida – oregano oil, caprylic acid (component of coconut oil)

Osteopathy
Osteopathy is a system of physical medicine that helps to identify and correct joint misalignments and muscle imbalances throughout the body. It involves a combination of massage, stretching and gentle manipulation. Although we may not yet know a huge amount about Fibromyalgia, there are natural ways to treat it and overcome the condition; there is no reason why you need to continue to suffer. In many cases you’ll start to see an improvement quite quickly.

More information
Oliver is a qualified and registered osteopath, Medical Acupuncturist and Musculoskeletal Injection Therapist. He specialises in the treatment of arthritis and headaches/migraines with patients all over the UK and Europe.

Much of Oliver’s specialties were learnt through personal experience; suffering from a series of chronic conditions from which he made a full recovery using alternative medicine approaches. This sparked his passion for specialising in the treatment of patients with chronic pain.