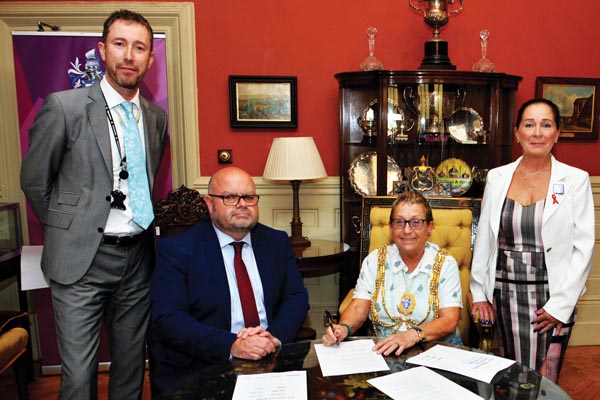 So what is Fast Track Cities?
At last a new high-speed rail link between London and Brighton I hear you cry; well no, unfortunately not. However it is an exciting new  international initiative which Brighton & Hove City Council signed up to just over one year ago to look with fresh eyes at HIV prevention and HIV treatment as well as a real commitment to tackling HIV stigma in our communities.

The initiative was launched on World AIDS Day 2014 in Paris, where mayors from 27 cities in over 50 countries met to sign the Paris Declaration on Fast-Track Cities committing to accelerate and scale-up their local HIV/AIDS responses.

Brighton & Hove was the first city in the UK to sign up, joining many other cities across the world; recently London and Manchester have also signed up.

But I thought HIV wasn’t a problem any more?
Wrong! An estimated 12% of people living with HIV don’t know that they are HIV positive. Things have improved hugely in many ways but we still have a long way to go to stop new cases of HIV and ensure that people already living with HIV can live freely without fear of discrimination.

However, you may already be aware, or have heard in the news or from friends, that things ARE changing in the world of HIV and AIDS. The efforts of healthcare professionals, health promoters and advances in medicine, mean that fewer people are being diagnosed with HIV. New figures, published in September by Public Health England (PHE), show a 17% decrease in HIV diagnoses in the UK in 2017 and a drop of more than a quarter in the last two years (28%). HIV treatments are also highly effective and when taken daily mean that those of us living with HIV can expect to live as long as someone without HIV.

So what’s happening?
HIV treatment has undoubtedly played a significant role in this decline. Now, when someone is diagnosed, they are encouraged to start treatment as soon as possible. This enables them to more quickly achieve an undetectable viral load, which means HIV can’t be passed on.

The other game changer is PrEP (Pre exposure prophylaxis), which is basically a pill of HIV medicine which is almost 100% effective at preventing someone contracting HIV when taken as prescribed. The community response to PrEP has been enormous with high demand for NHS trials as well as people buying PrEP online via online pharmacies advertised on sites such as ‘PrEPster’ and  ‘I Want PrEP Now’.

So what’s Fast-Track Cities all about and where does it fit in?
In a nutshell; the aim is to attain the UNAIDS global target of 90-90-90 and zero stigma and discrimination by 2020. The 90-90-90 targets are:
• Ensure that at least 90% of people living with HIV know their status;
• That 90% of people diagnosed with HIV are receiving  treatment;
• That 90% of those on treatment have undetectable HIV virus in their bloodstream.

Well were doing great aren’t we?
Well certainly the two targets relating to HIV treatment are looking good but we know that there are still hundreds of people out there who don’t realise that they have HIV; we have to do something about this. There’s also so much more to do to meet the Martin Fisher Foundation’s ambitious targets of ZERO HIV stigma, ZERO new HIV infections and ZERO deaths from HIV in Brighton & Hove.

So over the next few years we have some urgent challenges that will require the whole city to come together to ensure that we can effectively meet the targets; stop new HIV infections, get everyone living with HIV on treatment, and really start to tackle HIV stigma comprehensively across all our communities.

OK I get it, so how can I help?
There are a number of different ways to get involved; if you want to find out more, the Fast-Track Cities Task Force are holding a community engagement event on Friday, December 7 at Dorset Gardens Methodist Church from 2.30-4.30pm. We would love you to come along and share your ideas of how we can stop HIV in its tracks and wipe out HIV stigma. If you can’t make the event then there are loads of other ways you can help, big and small; we are particularly interesting in hearing about any of your own ideas; things which you think would work for you, your friends, your partners, your community. We invite you to get involved where possible by contacting us and sharing this journey.

For more details contact marc.tweed@tht.org.uk or Gillian.dean@bsuh.nhs.uk and let them know if you’d like to attend on the December 7!