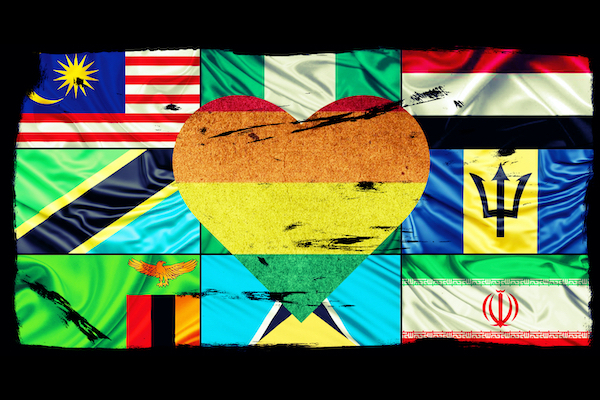 Peter Markham, a writer and correspondent for www.immigrationnews.co.uk, on why LGBTQ+ asylum
seekers in the UK and Europe are not being believed.

One of the biggest stories on Brighton’s doorstep this year has been the plight of migrants trying to cross the channel in order to reach the UK. People who have often endured massive trauma are risking their lives
to get to what they hope will be a better place.

Among those who arrive in the UK and the rest of Europe are asylum seekers who have been persecuted because of their Sexual Orientation or Gender Identity (SOGI). Some come from countries where the law offers them no protection and threatens them with death by stoning for simply being who they are. Researchers in Brighton have made some alarming discoveries about how such people are treated once they reach Europe.

An investigation conducted by the University of Sussex discovered that around one in three of those who seek asylum on the grounds of sexual orientation are having their claims rejected because officials say they simply don’t believe them. In the UK, this is a ‘good fit’ with the government’s hostile environment policy on immigration.

Claimants wanting to eventually seek British citizenship may find it impossible to produce any evidence at all to support their applications. If you’re fleeing from a state where the law does not allow you to express
your identity, you’re unlikely to arrive with a suitcase full of photographs or love letters as proof of past same-sex relationships, for example. When an assertion that you wish to identify as gay or trans is not believed, then a situation which may already feel like a living nightmare of anxiety and fear is suddenly made even worse, if that’s possible.

The University of Sussex’s research also found that claimants were given an unfair share of the responsibility to come up with proof which could substantiate their cases. International refugee law requires that evidence-gathering is the equal obligation of applicants and those deciding their claims. It was found that immigration officials often did not set out with an open mind when they talked to applicants but sat impassively waiting to be convinced.

The team who conducted the research believe that the default position should be belief in the accounts of claimants about who they are and what has happened to them. The stories of some are heartbreaking. Take the experiences of a woman who fled an African state which offers no protection to gay people. She says she feared for her life when found by police in bed with another woman. This is a person who suffered at the hands of an abusive husband after a forced marriage and was raped by two men who said they wanted to ‘straighten her out’.

In the UK, the same woman faced an intrusive and distressing seven-hour grilling by a UK Home Office official. At one point it was put to her that since arriving in the UK there had been nothing to stop her from having lesbian relationships and so why hadn’t she taken up the opportunity? Her explanation was that
she was still too frightened to open up to others and had not yet shaken off the stigma of being a gay woman.

Having to prove something so personal as your sexual identity to a stranger in a foreign country is in itself a potential trauma. There is also something very unfair about comparing the emotional welfare of those who have been unable to express themselves openly in their own countries against that of people who’ve grown up in the West. The fact is that claimants are having their applications for asylum binned because they are unable to come up with sufficient emotive language or thoughts about what made them realise they
were gay or trans in the first place.

How cases can be decided was starkly revealed last year when an immigration tribunal judge rejected one man’s claim in part because he didn’t think he had a gay enough ‘demeanour’. This was in apparent contrast to a witness who ‘wore lipstick‘ and who the judge saw fit to acknowledge as gay.

And just when you thought things couldn’t get any worse, according to research carried out by Stonewall, some asylum seekers experience violence and abuse because of their sexual orientation or gender identity
while they are in UK ‘holding centres’, either from other detainees or staff. Stonewall found that trans asylum seekers were particularly vulnerable, often unable to continue their transition or held in the wrong detention centres for their gender.

The UK has dismissed thousands of asylum claims from LGBTQ+ people who originate from countries where being gay is criminalised. When your identity is forensically picked over and then disbelieved, unbearable psychological strain follows for those who may face violence or death if they return to their home countries, just because of who they are.

The UK government and other European countries seem to be turning their backs on some of those who most need their help. Rejecting claims based on SOGI appears to be a quick and easy win for a Home Office hellbent on reducing the number of immigrants entering the country. All it has to do is say: “We don’t believe you.”

Peter Markham is a writer and correspondent for www.immigrationnews.co.uk, which raises awareness about migrant injustices and news around the world.