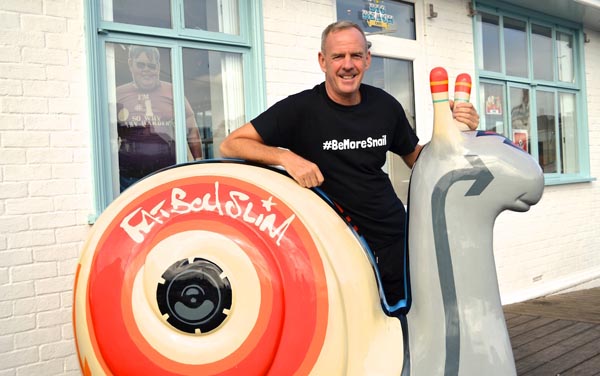 Legendary DJ and Martlets’ Ambassador, Norman Cook, AKA Fatboy Slim, will swap his usual moniker for one day only to mark Martlets’ inaugural #BeMoreSnail day and walking rather than running Norm’s Snail’s Pace Marathon on Friday, October 19.

On Friday, October 19 Norman will walk, rather than run, a marathon around all 50 of Snailspace’s mighty molluscs, which are currently dotted around the city of Brighton & Hove.

The whole idea of #BeMoreSnail day is to slow down, appreciate what’s around you and spend a bit more time with people you love. It is a philosophy that resonates with the care provided by Martlets, organisers of Snailspace.

Martlets is challenging everyone in the city, and beyond, to do something that embodies the spirit of the #BeMoreSnail message.  It was whilst thinking about what #BeMoreSnail meant to him that the idea for Norm’s Snail’s Pace Marathon was originally born.

Norman said: “I was thinking about a fundraising challenge I could take on as part of the Snailspace campaign. When Brighton had Snowdogs a few years ago my daughter Nelly and I did the whole trail, but we cheated a bit by going by car and we spread it over two days. So, completing the whole trail in one day was an obvious idea, and, as I’m a little bit of a runner and as the distance is about 26 miles, I thought about a marathon taking in every snail. But, as I started thinking about the whole #BeMoreSnail idea, taking things at your own pace, I thought hang on, let’s not run it, let’s walk it.

“The more I thought about it the more I wanted to embrace the idea of slowing down. By walking it is a far more sociable affair, I can get a selfie at each snail, chat to people as I’m walking, and can really embody the motto of #BeMoreSnail. I’m really hoping people will sponsor me ahead of the challenge and on the day.
So, 1 day, 26 miles and 50 snails – lets do this!”

Norman will be setting off from Big Beach Café and will visit every giant gastropod on the Snailspace route. He will be joined by friends and family at different stages throughout the day and is aiming to raise at least £5,000 for Martlets life-changing care. Norman has personal experience of the care provided by Martlets so understands how important the work of the hospice is to the community it serves.

One such person is local teacher, Gordon, 39, who was diagnosed earlier this year with early on-set Motor Neurone Disease (MND). Gordon explains what being under the care of Martlets has meant for him and his family.
“The diagnosis of a terminal illness with a median life expectancy of three years was a complete shock. Not only have I needed to get my head around issues with mortality but also getting my house in order, before I check out. That’s not something you envisage needing to do at the age of 39, but Martlets is helping me cope with every aspect of the journey.

“Martlets is so much more than end of life care. The support I’ve received has included how to deal with different symptoms as and when they arise or get worse. I’ve also received guidance for how to broker the news with my children and how to talk about work.

“Not only have I received services to aid in my initial diagnosis, like speech and language therapy, but Martlets offers a whole other holistic side to the care here, including counselling, Reiki, and massages for me and my wife. And, I have to say, even though the gravity of the situation is serious and life-changing, if I didn’t have this kind of provision available, it would make it all so much harder.”

To donate online and support Norman on his epic walk to help local people like Gordon, click here: