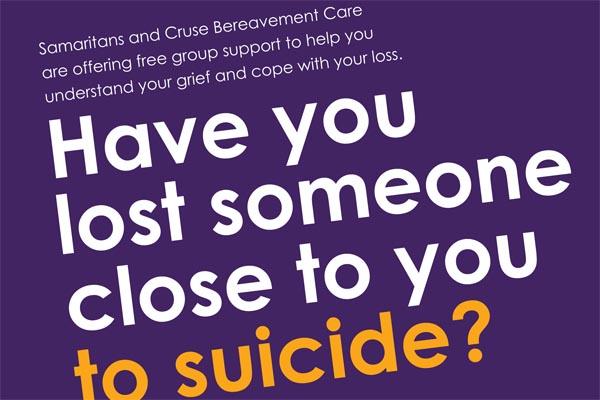 Brighton, Hove and District Samaritans continue to work with Cruse Bereavement Care in Brighton to provide a series of support groups for people who have been affected by suicide.

Each Facing The Future group has a maximum of eight participants and provides help, support, advice and an opportunity to meet others who have had similar experiences.

The first Brighton Hove and District group met in October 2016 and the next group meeting on Thursday, February 8, 2018 will be the sixth to have taken place in the area.

Facing the Future groups are free of charge and available to anyone over 18. Each group session starts at 6.30pm and lasts for 90 minutes. The groups will run for five weeks on February 8, 15 and 22 and March 1, 8 and 15. The bereavement does not have to have been recent, although the service is designed primarily for people bereaved for more than 3 months.

The groups are led jointly by experienced Samaritans and Cruse volunteers who have received specialist training in helping those bereaved by suicide.

Bereavement is one of the most distressing experiences a person will face. Bereavement by suicide is not necessarily more severe than other types of bereavement, but those bereaved are more likely to experience stigmatisation, blame, emptiness, shame, guilt, and a sense of rejection.

In addition, there is evidence to suggest those bereaved by suicide are at increased risk of taking their own life by suicide. In England, over 4,000 people take their own lives every year, so when considering their families and friends, the number of people affected by suicide is of significant number.

The evidence that these support groups work is undeniable:

♦ 40% felt better and most interviewees reported that their positive shift in wellbeing was due to the sessions helping them move forward in their recovery, enabling them to process their thoughts and feelings.

♦ 96% of respondents found the group helpful with over two thirds finding the sessions helpful by enabling them to:

♦ Meet people who understood how they felt

♦ Talk in a safe environment

♦ Be part of a group discussion

The local meetings all take place at a central Brighton location.

Alison Pratt, Director of Brighton, Hove and District Samaritans, said: “If you’re interested in attending a group, you can register online at www.facingthefuturegroups.org. It’s really straightforward and you are very welcome to attend even if you’re already receiving other forms of support.”

Samaritans is available round the clock, every single day of the year. They provide a safe place for anyone struggling to cope, whoever they are, however they feel, whatever life has done to them.

Or to find the Samaritan branch nearest to you, click here: