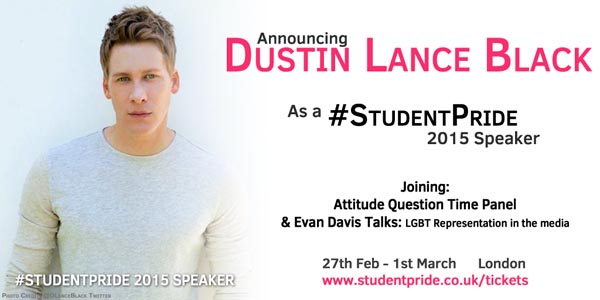 Acclaimed screenwriter Dustin Lance Black has been added to the line-up of speakers for the Attitude Question Time panel at Student Pride later this month.

DUSTIN will also share his Oscar-winning insight with Newsnight and Dragons’ Den presenter Evan Davis, for a discussion of LGBT representation in film and TV.

Dustin lives in London with his partner, British olympic diver Tom Daley, who he has been dating since Tom came out to his YouTube followers in December 2013.

Dustin wrote the acclaimed Oscar-winning movie Milk and was named top of the Advocates’ Forty under 40 list of openly gay influential people issue in 2009.

When he was young, he struggled to come to terms with his sexuality. He believes the Mormon and military surroundings of his town played a large part in this.

His brother Marcus, who was also gay, died of cancer in 2012 and since then, Dustin has continued his LGBT activism with unparalleled reverence.

In a passionate speech after winning his Oscar, he said: “When I was 13 years old, my beautiful mother and my father moved me from a conservative Mormon home in San Antonio, Texas, to California, and I heard the story of Harvey Milk. And it gave me hope”

Matthew Follows, chair of Student Pride, says he is looking forward to Dustin inspiring the same hope in hundreds of students in the UK during Student Pride.

Student Pride, which will take place from Saturday, February 27 to Sunday, March 1 at the University of Westminster’s Marylebone campus opposite Madame Tussauds, is centred round a free daytime festival and jobs fair and an evening entertainment event hosted by G-A-Y.

For more information and to purchase wristbands, click here: