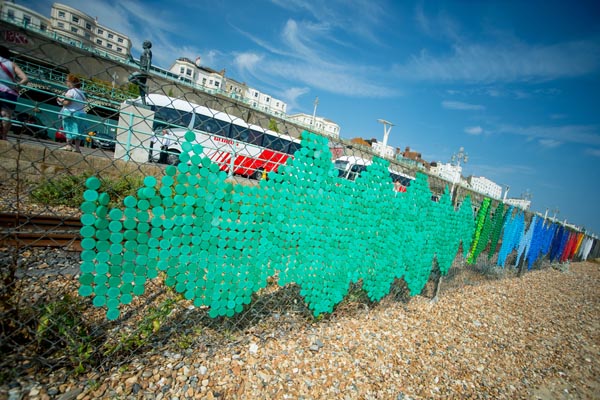 LOCAL designer Irene Soler has teamed up with around 60 volunteers and city organisations, businesses and groups to produce the piece at the Volks Railway called A Drop in the Ocean.

Irene got the idea after she started to pick up litter from the beach and noticed much of it was discarded bottle tops. She instantly realised that a design with the multi-coloured plastic would be a brilliant way of highlighting the plague of single-use plastics on the city’s beaches.

Irene said: “I hope that when people see all these little bits of plastic – each one with the potential to kill a sea bird, fish or other creature – they’ll think twice before leaving their bottle tops lying around.

“The design needed to be something visual to raise awareness. Something to get people involved, to get them talking and thinking about how the status quo could be different. Slowly the idea of A Drop in The Ocean evolved.”

The tops were collected from people carrying out beach cleans, and businesses – including the Big Beach Café, The Pump Room, Seafront Office, Jungle Rumble, Yellowave, Volk’s Railway Visitor Centre and the World Cetacean Alliance – all who had a special bottle where people could bin their tops rather than bin or discard them.

This installation, at 18 metres long is phase one of three. The final bottle tops will go up by the end of this year and the installation will stay up until spring next year.

So far, the groups involved are the 3D & Craft course at Brighton Uni, The Green Centre, Pier2Pier, SurfersAgainstSewage, The Fair Shop, RubyMoon, the Volks Railway crew and the City Council, whose Cityclean staff separated the bottle tops they collected on the beach and along the seafront.

The Rampion Fund granted funding to Irene to help raise awareness of the impact of plastic pollution.

Councillor Gill Mitchell, chair of the council’s Environment, Transport & Sustainability Committee, said: “This is a fantastic art installation that really raises awareness of the amount of plastic that is found on our beaches. It also shows how something very creative can be designed and produced from the co-operation of the community, various businesses and organisations, and the council.”